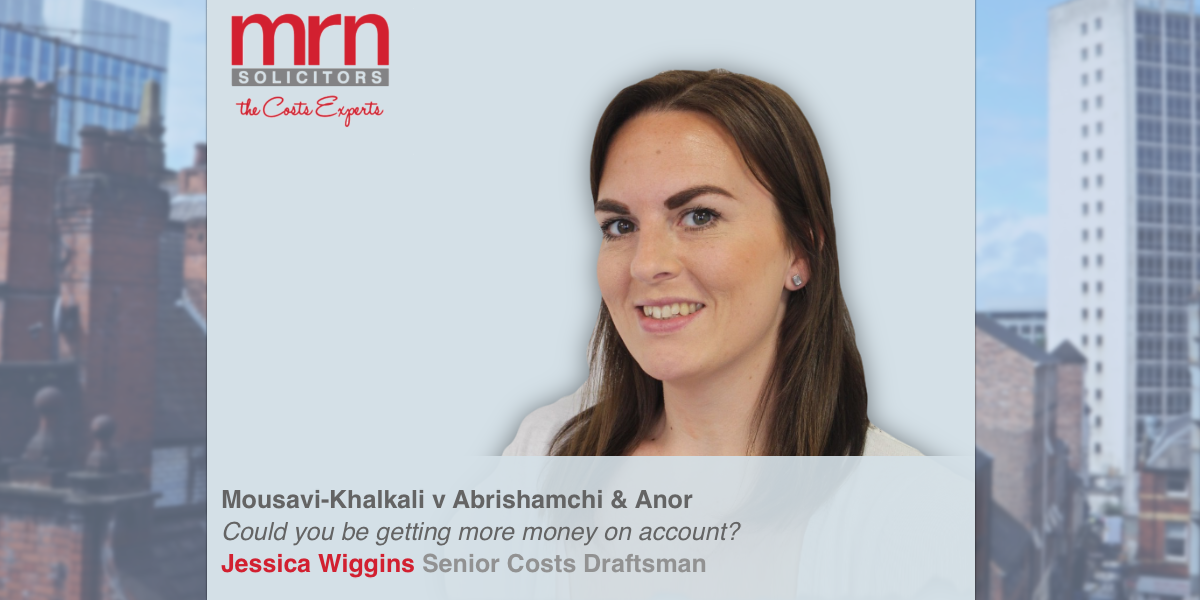 The Court of Appeal offered some very welcome guidance as to how the amount of a payment on account of costs may be calculated in the case of Mousavi-Khalkali v Abrishamchi & Anor [2020] EWCA Civ 1493.

Prior to this case we did, of course, have the authority of Mars UK Ltd v Teknowledge Ltd [2008] EWHC 226 (Pat) wherein the Court determined that two thirds of the figure it was estimated the receiving party was likely to recover on assessment would be a reasonable sum.

Thomas Pink Ltd -v-Victoria’s Secret UK Limited [2014] EWHC 325) also provided an indication of what the Court may consider to be a reasonable sum in relation to budgeted future costs, determining that 90% of the approved future costs ought to be awarded where those phases had been incurred.

However, we now also have the Court of Appeal’s views on what constitutes a “reasonable sum” following the Court’s decision in Mousavi-Khalkali v Abrishamchi & Anor [2020] EWCA Civ 1493. The Court of Appeal was considering an appeal in relation to an issue of jurisdiction and also in relation to the sum awarded on account of costs by the Judge at first instance. The Judge at first instance had awarded the Respondents a payment on account of costs of £325,000 as against the costs they were claiming of £633,000. The Judge had arrived at this figure by estimating that the Respondents’ likely recovery at assessment would be in the region of £450,000 and subsequently discounting this figure by an appropriate margin to allow for error.

In considering what discount to apply, the Judge commented:

“22…In my judgment the discounting should be quite substantial given the scale of the sums though I have to guard against double discounting given that I have already discounted the £633,000 figure by a significant sum.”

The Appellant appealed, contending that, in taking the figure of £450,000 as an estimate of the costs the Respondents were likely to recover, the Judge had strayed outside the bounds of reasonable disagreement. The Appellant argued this was an “astonishing” sum, divorced from the reality of the sum the respondent might ultimately be awarded. By contrast, the Appellant had incurred costs of only £263,000 including VAT and as such they argued that a good recovery for the Respondents would be in the region of £200,000.

‘79.In my judgment the level of the respondents’ total costs, whilst perhaps on the high side, is not particularly surprising in the context of proceedings in the Business & Property Courts which involved a worldwide freezing injunction and a two-day hearing on jurisdiction and discharge, with both leading and junior counsel instructed. That remains my view even though the sums at stake were relatively small in Business and Property Court terms: the appellant chose to apply for draconian relief, did so without making full and frank disclosure and raised a panoply of issues and arguments throughout the proceedings. The costs of defending such proceedings with vigour will necessarily have been very substantial, regardless of the sums claimed.

80.In that context, the Judge cannot be criticised for taking a starting point of £450,000, particularly as the costs relating to the WFO were awarded on an indemnity basis. Further, his application of a 28% discount (in arriving at a figure of £325,000) appears entirely reasonable. Whilst I might have ordered payment of a slightly lower sum, the sum chosen by the Judge was well within the ambit of his discretion.’

As a result, the appeal was dismissed and the award of £325,000 on account of costs was allowed to stand.

In my opinion, whilst the guidance does not give us an indication of exact figures that will be awarded in specific cases, it does at least give us a helpful insight into how the Court might approach determining that sum.

When you are agreeing the terms of the final Order with your opponent or when the Court is drawing up the final Order, this is the time to consider how much you should be requesting so that provision can be made for the same within the Order. We would advise that careful consideration is given to the sum sought as it may be that, on the facts of your case, the Court would award you more than you would otherwise have requested.

If you are at all unsure as to where to pitch your request, MRN have a wealth of experience in dealing with requests for payments on account and would be happy to talk it through with you.