Does an “avalanche” of additional disclosure represent a significant development pursuant to CPR 3.15A? 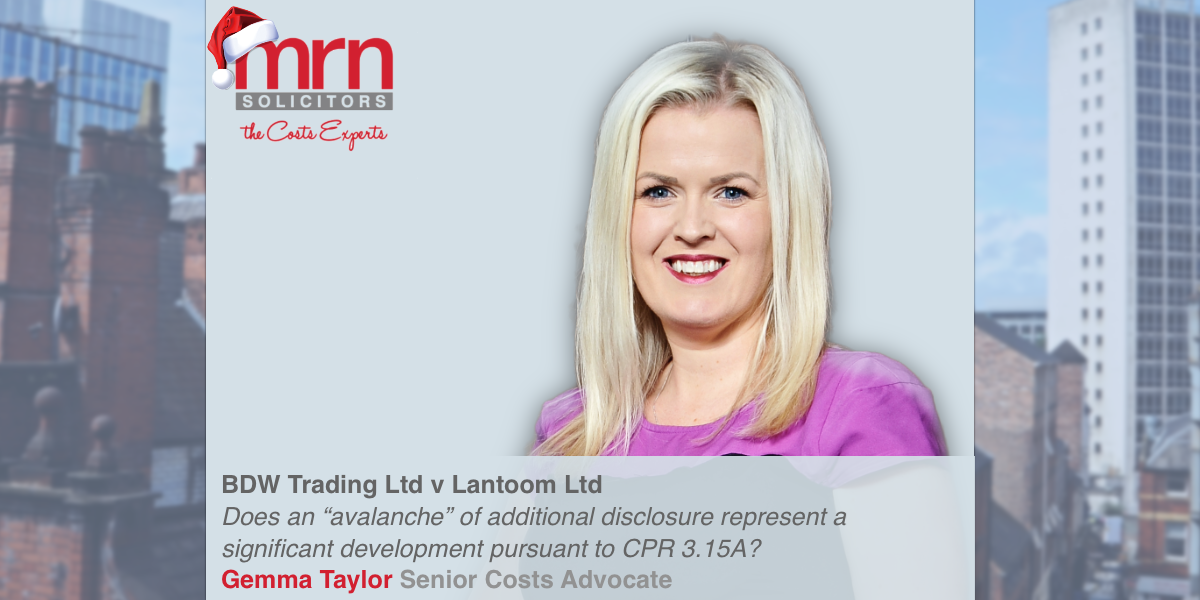 In this recent Technology and Construction Court (Queen’s Bench Division) case, Mr Justice Kerr considered whether a substantial increase of disclosure ought to be considered a significant development and whether or not the “knock-on effect” to other phases, such as witness evidence, should be considered.

“The number of documents requiring review for the purposes of disclosure was over three times more than we had envisaged. Within the assumptions within the claimant’s Cost Budget, we stated that the amount of documents collected would be less than 50,000 and that the individual review of documents would be no more than 15,000 after key words were applied. It became clear throughout the course of the proceedings that over 250,000 documents were collected which were reduced to 200,000 after applying initial key words. Thus, we collected 4–5 times more documents than our stated assumption in the claimant’s Cost Budget”.

The Claimant asserted that this represented a significant development in litigation, justifying an upwards revision to the Claimant’s Costs Budget.

Agreement Between the Parties

A Consent Order was agreed between the parties allowing an increase in the disclosure phase to both the Claimant’s budget and the Defendant’s budget. Prior to the Pre-Trial Review the claimant served a Precedent T seeking an increase in the witness evidence phase of £69,620 and £106,008.94 for experts. It was the Claimant’s case that the additional disclosure required the Claimant to produce almost triple the amount of anticipated witness statements (8 rather than the previously envisaged 3) and that the documentation to be considered by the Claimant’s expert had increased.

The Defendant’s position was that the requested increases were disproportionate and they had already accounted for the increase by way of the consent order whereby they agreed to increase the disclosure phase.

Mr Justice Kerr agreed with the Claimant that the Defendant had “implicitly, if grudgingly” accepted that the significant increase to disclosure did represent a significant development when they agreed the consent order and sought an increase to their own costs.

Mr Justice did not accept the Defendant’s argument that “all the consequences of that development were captured by the Claimant’s…increase for the disclosure phase. The increase was not part of and did not apply to work done in the witness statement and expert report phases; but the knock on effects of the avalanche of documents anticipated by neither side were, by the same logic, likely to impact on the adequacy of budget provision for subsequent phases unless the additional documents proved irrelevant or repetitive”. The Court then increased the Witness Evidence and Expert Evidence phases to allow for the additional work required

This decision is very much a welcome one for a Receiving Party caught somewhat off guard by vast levels of disclosure. The Court’s acknowledgment and acceptance of a knock-on effect to other phases in the budget is also a positive step in relation to the far-reaching implications by an increase to disclosure.