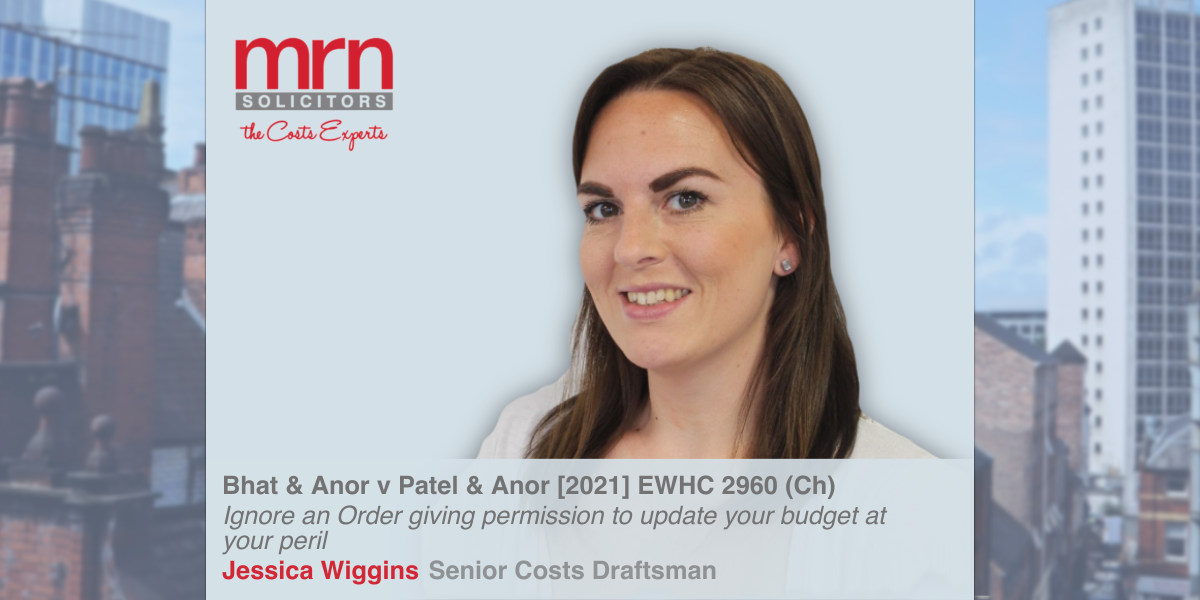 In Bhat & Anor v Patel & Anor [2021] EWHC 2960 (Ch) Mrs Justice Fancourt held that defendants, who had not filed a revised costs budget, were not entitled to recover the costs of that counterclaim unless a relief from sanctions application was successful.

The parties were all doctors who had been, or remained, partners at a doctor’s surgery. There were two actions that had been consolidated. The first action was a claim by the Claimants (Dr and Mrs Patel) for possession and arrears of rent in respect of 105 Calcutta Rd, Tilbury, Essex (the doctor’s surgery). The second action, which was consolidated as a counterclaim at trial, was a claim by the Defendants (Dr and Mrs Bhat) for a beneficial interest in land adjoining the property and damages as a result of a financial contribution they made to works carried out on an extension built on the land owned by Dr and Mrs Patel which adjoined the surgery.

The Defendants appealed an Order made by Recorder Geraint Jones QC in the County Court at Basildon on 11 June 2021, following the trial of the two actions. The Order was appealed for various reasons though we focus here only on the one reason relevant to costs, namely that the Trial Judge had erred in awarding the Claimants their costs of the counterclaim as they had failed to file a revised budget accounting for the costs of the counterclaim and had failed to file an application for relief from sanctions in default of the same.

The Defendants argued the Claimants were in default of a case management order dated 25 September 2020 requiring them to submit any budget for the costs of the counterclaim by 12 October 2020. As no such costs budget was submitted and no relief against sanctions was sought, they were to be taken as having filed a budget comprising only the applicable court fees of the counterclaim: CPR rule 3.14.

The Recorder held that the Claimants were not in default of a mandatory order to file a costs budget and as such, relief against sanctions was not required. In the exercise of his discretion, he therefore allowed the Claimants to recover their costs of the counterclaim.

The Defendants appealed on the basis that the Recorder was wrong to interpret the Order as not requiring a costs budget to be filed and that he should have required the Claimants to seek relief against sanctions, and that in any event he was wrong to exercise his discretion to allow the costs of the counterclaim to be recovered.

“The parties have permission to file and serve updated costs budgets by 12 October 2020 if so advised, to reflect the consolidation of the proceedings. The parties will endeavour to agree their updated budgets and any points of disagreement will be dealt with by the Trial judge.”

On appeal, Mrs Justice Fancourt was of the view that the Order was clearly an order giving the parties the opportunity to file an amended costs budget, to add additional budgeted costs of the beneficial ownership claim, and requiring them to file one by 12 October 2020 if they wished to do so. Otherwise, the parties would be limited to the costs budgets already filed on the possession claim. Mrs Justice Fancourt was of the view that was clearly so because, by virtue of the consolidation order, there was to be a costs budget for the consolidated action – an “updated budget”. If no updated budget was filed, the existing budget would be the only applicable budget. To interpret the order in the way contended for by the Claimants would have given the parties an option whether to file updated budgets or not, and, if not, the ability to seek to recover costs of the counterclaim without a budget. Mrs Justice Fancourt was of the view that was not what the Order meant though she accepted this could have been better expressed.

As the Claimants did not file an updated budget within the specified time, Mrs Justice Fancourt concluded the Claimants ought to have submitted an application for relief from sanctions.

There was a further issue, however, in that there was a disagreement between the parties as to whether or not on 7 June 2021, the day before the start of the trial, they had reached oral agreement to dispense with costs budgets for the counterclaim. That issue was not resolved by the Recorder.

Mrs Justice Fancourt therefore concluded the Recorder was in error in exercising a broader discretion, as if the parties had waived non-compliance with the Order, without making a finding that they had done so. It was not possible for Mrs Justice Fancourt to resolve this issue based on what was before her so she substituted the paragraph in the original Order for an Order that the Defendants pay the Claimants’ costs of the possession claim only and remitted the issue of whether or not the parties had agreed to dispense with the need for updated budgets to the County Court if the Claimants wished to pursue the costs of the counterclaim.

This case is therefore a very clear reminder that careful consideration should be given to Orders granting permission to file updated budgets and, should you find yourself in default, you should issue an application for relief from sanctions at the earliest opportunity. As can be seen here, the consequences of not doing so could be significant.