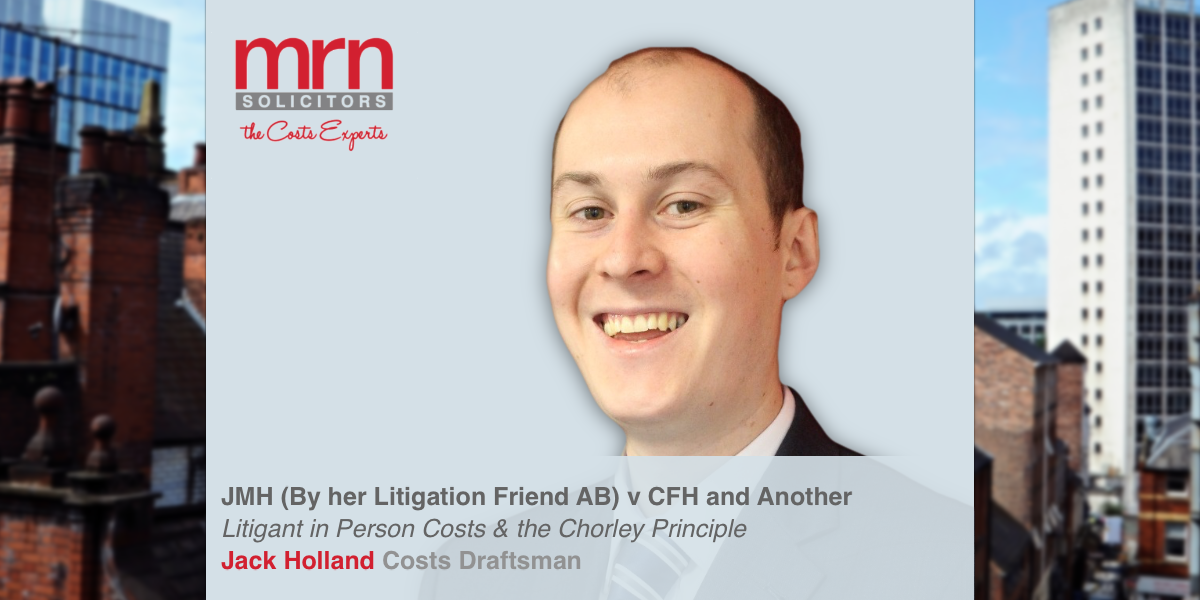 In the recent case of JMH (By her Litigation Friend AB) v CFH and Another [2020] Costs LR 1681 focus was placed upon the ability of a practitioner’s ability to secure costs at solicitor’s rates as opposed to litigant in person rates when acting as an agent for their firm.

The background of this case was a dispute about the applicant’s capacity to revoke an enduring power of attorney of the first respondent to instead seek a lasting power of attorney in favour of the second respondent. The second respondent was an employed solicitor however following the introduction of interim deputy was joined as a party to the proceedings in relation to the issue of costs, also later disclaiming her role as an attorney.

Following the conclusion of the substantive dispute, while it was agreed that the first respondents costs were to be paid by the applicant in accordance with the usual rule on costs in the Court of Protection, the second respondent’s costs were objected to being paid on this basis on the grounds that litigant in person principles should be applied instead.

HHJ Evans-Gordon presided over the decision in respect of costs and split the chronology of the claim into three sections with the primary focus being on the second period. This period included sums which were claimed after the introduction of the interim deputy on 12 April 2019, after the works caught under the scope of the original retainer had ended, and they were only a party to the claim in relation to costs.

Here the substantive issue discussed as to the second respondent’s role and identity within the proceedings to qualify whether the Chorley Principle applied which would allow recovery at her charging solicitor rate as opposed to litigant in person rates.

HHJ Evans-Gordon evaluated the basis of the instruction of the second respondent to establish whether the Chorley Principle is applicable. The basis of the Principle was outlined as ‘a solicitor who uses his professional skills in his own cause ought to recovery those costs because, otherwise, he would always employ another solicitor: it would be wrong in principle to permit an unsuccessful opponent to obtain a benefit from the solicitor acting for himself’. HHJ Evans-Gordon did however outline the qualifying factors of this rule to evidence whether a practitioner would fall into the scope of a litigant in person stating that ‘in all reported cases the solicitor litigant was acting through his own practice or firm or had instructed a third-party firm and ‘relieved the firm of some of the work by doing it himself’ rendering them not a ‘true litigant in person’.

HHJ Evans-Gordon ruled that the present case circumstances would amount to a major extension of the Chorley Principle which was not correct. It was held that the Chorley Principle ‘applies only where the solicitor litigant has instructed, expressly or impliedly, a firm, including their own firm, to act for them’ and as the second respondent had failed to do this it was fatal to the claim being sought. Furthermore it was held that the rules pertaining to CPR 46.5 were not to be dis-applied purely on the grounds that work was undertaken by the second respondent during office hours and the firm did not object to the same as to do so would ‘drive a coach and horses through CPR 46.5’.

In summary therefore solicitors acting on behalf of their clients in fields whereby litigant in person costs can be alleged should be sure their contractual working relationship is clear should they wish to adopt the Chorley Principle safeguarding their costs as a solicitor. It is however the writer’s opinion however that this principle should be taken on a broader basis to always ensure you costs are clearly established to avoid any ambiguity come billing.