No interest on costs of loans granted but has the door been left open? 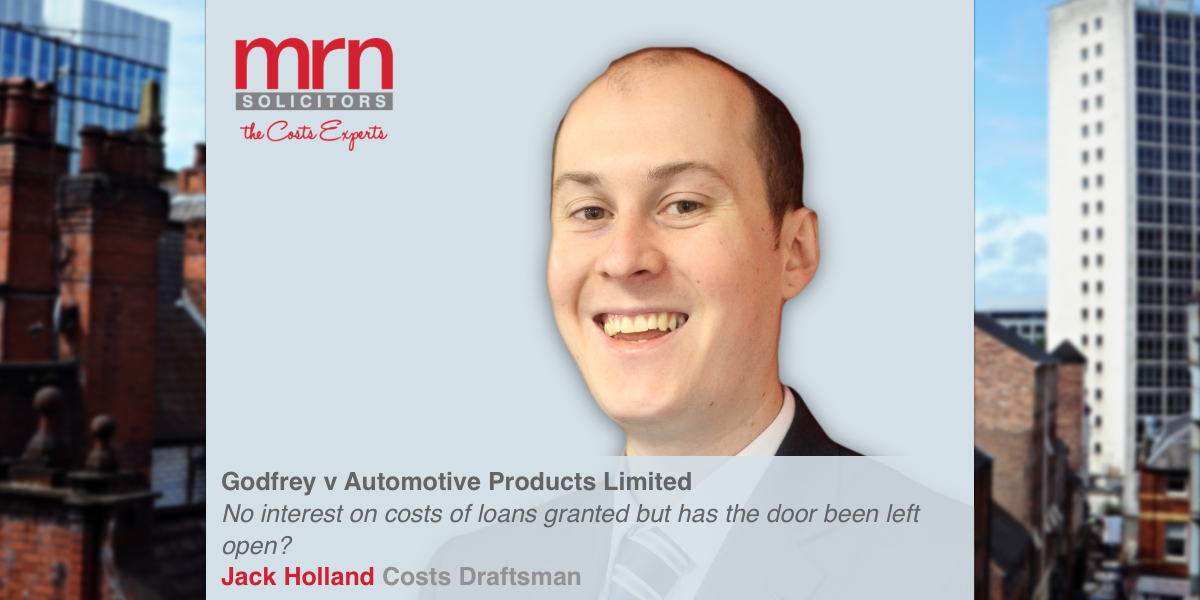 The case of Godfrey v Automotive Products Limited was a claim for noise-induced hearing loss where the claim settled pre-issue in the sum of £2,000.00. As part of the claim for costs, a sum of £388.71 was sought within the Bill of Costs totalling £7,233.48 for the interests of a funding loan which charged a commercial rate of interest set at 15.3% APR.

The parties were not able to reach an agreement as to the interest payable and the question as to the recoverability of the interest was decided by District Judge Baldwin sitting a Regional Costs Judge in the County Court at Liverpool.

Submissions were made on behalf of the Claimant that the sums were properly incurred on the grounds of seeking access to justice and that the Claimant should not be de-barred from this form of litigation funding which is readily accepted in the Court’s Commercial counter-part. The Defendant objected on the basis that the sums sought were untenable given the percentages sought and also questioned as to their recovery beyond the trial judge stage (CPR 44.2(6)(g)).

District Judge Baldwin firstly and expressly confirmed that the ability of the Court to decide the point is not limited as suggested by the Defendant and was ‘satisfied that there is no bar to a costs judge exercising the power granted to the Court under 44.2(6)’ to decide the point on interest. It was however deemed that despite this authority it was not District Judge Baldwin’s stance that this is what justice requires.

Focus was given to the ‘real and genuine need for the Claimant to finance his disbursements by way of a loan as a result of impecuniosity’ which resulted in the claim being likely ‘stifled, without such financial assistance being provided’. District Judge Baldwin advised that while ‘other judges might be prepared to make such assumptions in the costs arena, perhaps when furnished with rather more information and/or context than in the instance case, I prefer to adopt a more cautious approach in the context of lower value, sometimes high volume, personal injury claims into which category this claim, I believe, fits’.

District Judge Baldwin then turned to the position as to the discretion surrounding the actual award of interest and the percentage to be decided upon. It was made clear that the Court was ‘not to engage in in-depth evidence gathering exercises, but to adopt a broad brush, that is a proportionate approach.

District Judge Baldwin therefore concluded that ‘whilst I am persuaded that a discretion exists to award interest from a date before the order for costs, encompassing interest of the type at issue here, I am not persuaded that it is appropriate for me actually to exercise any such discretion in favour of the Claimant’.

To conclude therefore while it may seem that this case stands as a block to the recoverability of interest sums for disbursements based loans outside of the commercial sphere, it is the writer’s opinion that should the facts lend themselves as to the real and genuine requirement for such a loan to be taken-out that the Court’s discretion could be granted to allow for recoverability despite the decision.