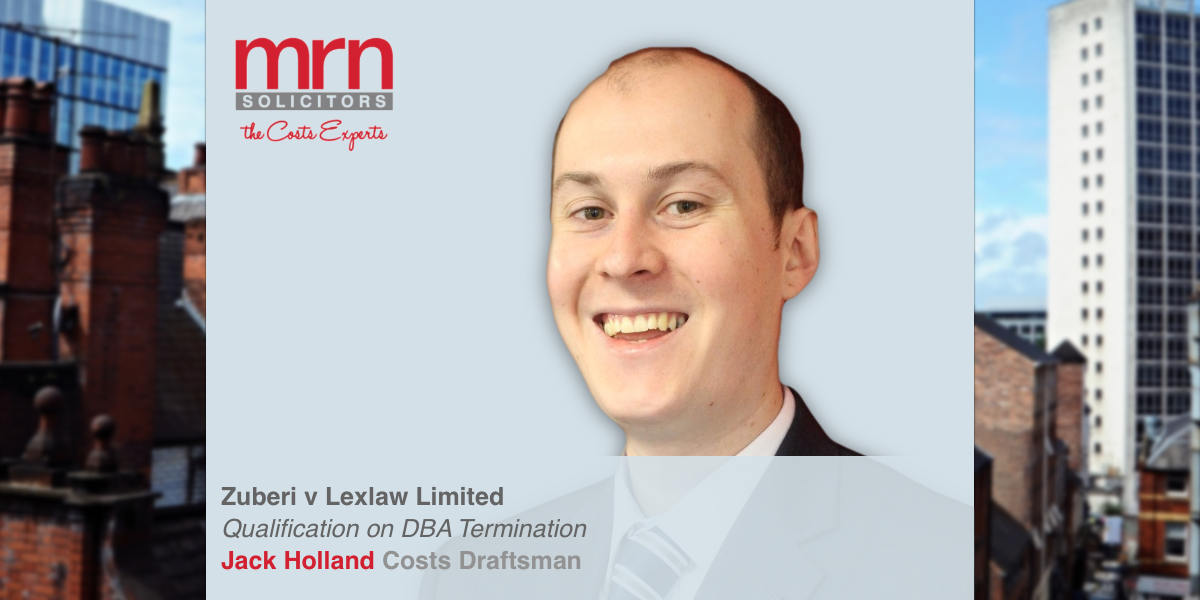 A Court of Appeal judgment on the termination of Damages Based Agreements (DBA’s) has recently been handed down in the case of Zuberi v Lexlaw Limited seemingly bringing to an end the uncertainty surrounding termination prior to conclusion and the ability for a Solicitor to recover its’ costs.

The facts of the case do not largely lend to the decisions made but in essence Mrs Zuberi borrowed money from a bank and subsequently brought a claim against them alleging mis-selling of certain financial products. She instructed Lexlaw Limited to act on her behalf and an agreement was drawn by way of a DBA.

The terms of the agreement critical to this decision were as follows:

In the Court’s decision it expressly evidenced this ‘defect’ in drafting with Lord Justice Coulson confirming that ‘nobody can pretend that these Regulations represent the draftsman’s finest hour’. Specific focus was given to the intention behind the statute by Lord Justice Lewison referencing a previous submission in Pollen Estate Trustee Co Ltd v Revenue and Customs Commissioners [2013] EWCA Civ 753, [2013] 1 WLR 3785 at [24]:

“The modern approach to statutory construction is to have regard to the purpose of a particular provision and interpret its language, so far as possible, in a way which best gives effect to that purpose.”

Further comment was also provided as to the termination clauses scope within the Regulations. Lord Justice Coulson’s comments confirmed that ‘the fact that the Regulations do not prohibit or limit termination provisions for general civil litigation is not an inadvertent omission. On the contrary, as can be seen from the Explanatory Memorandum, it is the result of a deliberate decision. Parliament shied away from imposing any restrictions on termination provisions generally because it acknowledged that, in such cases, lawyers would be involved and therefore would be subjected to the regulatory provisions of their own professional bodies.’

It was therefore held that regardless of the lack of an express regulation allowing a Solicitor to recover its’ costs upon termination for non-employment matters coupled with the fact that the termination clause was outside of the scope of these Regulations that clause 6 of the contract was not unlawful and therefore binding.

It is the writer’s opinion that this decision seems sensible and will go further in promoting alternative forms of funding for clients without practitioners being unprotected. This will ultimately work in favour of both parties as for many Damage Based Agreements are of significant benefit in the knowledge that payment will be required upon reaching a successful conclusion.