When would Relief from Sanctions be an injustice? 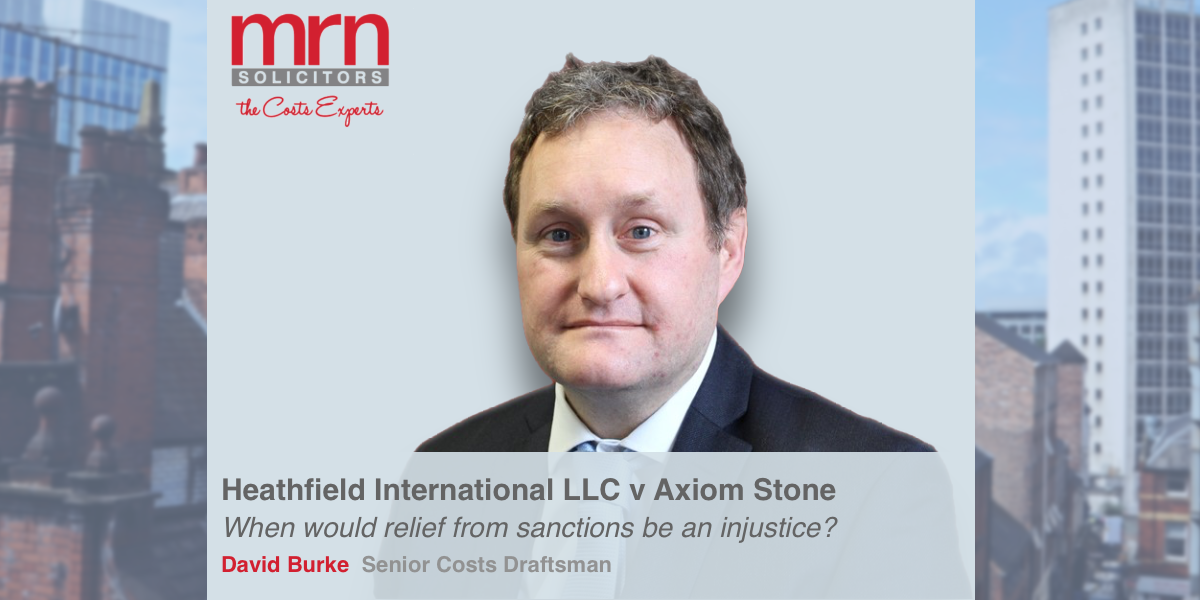 In the recent case of Heathfield International LLC v Axiom Stone” (London) Ltd [2020] EWHC 1075 (Ch) the 2nd Defendant filed their Costs Budget out of time. They issued an application for relief from sanction and may well have expected to obtain the same in light of the approach to be taken following “Denton” and recent supporting cases such as “Manchester Shipping Ltd v Balfour Worldwide Ltd and another” [2020] EWHC 164 (Comm). However, in a decision which reinforces the fact that the rules are to be followed, HHJ Simon Barker QC refused relief from sanction. He referenced other procedural failings by the 2nd Defendant which, whilst they could be considered small in and of themselves, had a cumulative effect upon the Judge’s decision.

The action arose in a claim brought by the Claimant against the Defendants for a sum in excess of £260,000 allegedly owing for services rendered, plus interest and compensation under the Late Payment of Commercial Debts (Interest) Act 1998 totalling a further £100,000 at the time.

On 20.03.19, the Court issued a proposed Notice of Allocation to the Multi-Track which included a direction that the parties “file and exchange budgets…not later than 21 days before the first case management conference”.

On 07.10.19, a Notice of CCMC was issued for a hearing to be held on 10.12.19. Within the notice it was reiterated that budgets were to be filed in accordance with CPR3.13. As such, budgets were to be filed by 18.11.19 and the Claimant and 1st Defendant duly complied with the deadline as well as undertaking the exchange of Precedent R’s in accordance with the timescales laid out in CPR3. The 2nd Defendant did not engaged in the process. By an order made on 06.12.19, the CCMC of 10.12.19 was vacated and relisted for 30.40.20 to allow extra time in respect of applications the Defendants had made in respect of security for costs.

The 2nd Defendant contended it had been agreed that the CCMC would be vacated which was the reason that they did not file a budget. This was denied by the Claimant’s solicitors who asserted the agreement to vacate the CCMC was only reached post-18.11.19 hence why the Claimant and 1st Defendant had complied with the order.

In line with the date of the adjourned CCMC, budgets became due by 08.04.20. Both the Claimant and 1st Defendant again complied with the direction. Once again, the 2nd Defendant failed to comply not sending their Budget until 14.04.20. At no stage had the 2nd Defendant sought agreement to an extension nor applied for relief from sanction. Additionally, the budget failed to comply with the latest guidance that all costs up to and including the CCMC should be treated as incurred costs.

In accordance with the Directions Order of 20.04.20, the parties were to file a CCMC bundle by 24.04.20 to include Precedent H Budgets and Precedent R reports in relation to each party’s costs. Both the Claimant and the 1st Defendant complied. The 2nd Defendant failed to file and serve any Precedent R’s to the other parties budgets.

At the CCMC, the 2nd Defendant’s Counsel’s contention that the decision in “Manchester Shipping Ltd” should apply as it was an analogous case was rejected by HHJ Barker who confirmed that each case should turn on the particular facts of the case.

HHJ Barker found that the 2nd Defendant had shown a “disregard for the rules, practice directions and orders” and rejected the contention that there had been no impact upon the Court or other Court users. Consideration was given to granting a form of hybrid relief however the Court found that the 2nd Defendant’s conduct showed a “persistent failure to engage with the obligation to provide a costs budget and a total failure to engage in discussion of or commentary on opposing parties’ budgets” and even at the CCMC had failed to file a Precedent R. The Court ruled that the 2nd Defendant was to “be treated as having filed a budget comprising only the applicable court fees”.

The decision confirms that each claim must stand on its own merits however it should also stand as a timely reminder that, even in the current situation we all face, that  it is of vital important to ensure compliance with the relevant rules, practice directions and orders.