Wrong in Law but not unreasonable 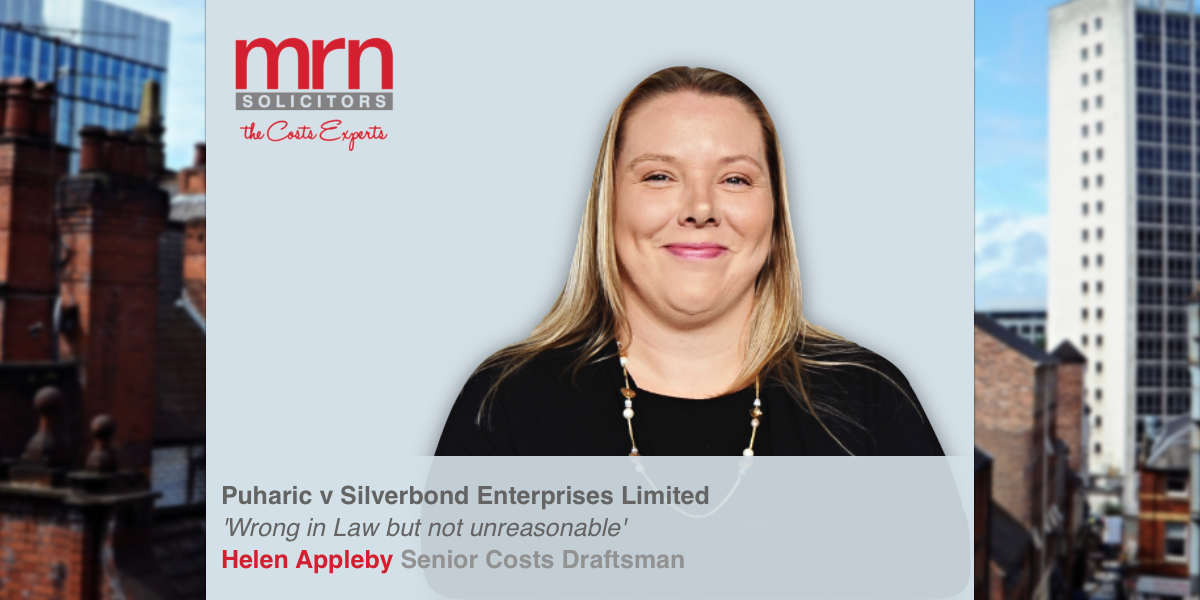 This Article considers the implications of Cost Orders following Judgement for the losing party. As with all Proceedings, the conduct of each party is a pivotal point for the Court to consider when determining the basis upon which Costs are to be paid.

Let’s consider the recent case of Puharic –v- Silverbond Enterprises Limited (2021). This case was brought before DJ Mansfield where Judgement was given in favour of the Defendant for the substantive action. DJ Mansfield was asked to consider whether or not an award on the Indemnity Basis should be given to the Defendant, however, the Judge held that whilst the Claim had failed, their Claimant’s conduct had not been improper or unreasonable and therefore Costs were awarded on the Standard Basis.

Personally, my view is that this is a reasonable one. Parties should not be further penalised for bringing reasonable claims where they have a genuine belief that their Claim has merit. It is sufficient penalty that costs are payable at all.

The Court also re-visited the issue of a Payment on Account of Costs. CPR 44.2(8) provides that where the court orders a party to pay costs subject to detailed assessment, it will order that party to pay a reasonable sum on account of costs, unless there is good reason not to do so.

The question is what amounts to a reasonable sum.

In this case, the claimant offered 50% of the defendant’s budgeted costs. The Judge held that the Claimant’s proposal failed to have regard to the developing body of law as to the relationship between costs management and detailed assessment. The Judge noted that the court should have regard to the fact that on detailed assessment the costs judge, pursuant to CPR 3.18, will not depart from the approved or agreed budget unless satisfied that there is good reason to do so (MacInnes v Gross [2017] 4 WLR 49 at paras 25–28). In MacInnes, Coulson J (as he then was) regarded 10% as the maximum deduction appropriate in a case where there is an approved costs budget. The same point is made in the notes to the 2020 White Book at 44.2.12 p. 1384, where reference is made to Thomas Pink Ltd v Victoria’s Secret UK Ltd [2014] EWHC 3258 (Ch), another case where 90% of the approved budgeted costs was awarded.

Given that no submissions were made to suggest that there was good reason to depart from the approved budget on detailed assessment the Judge adopted the approach referred to in the authorities mentioned above, and included in a payment on account 90% of the approved budgeted costs.

The Incurred Costs were different. In respect of those costs, the Judge awarded a reasonable sum in accordance with the guidance in Excalibur Ventures LLC v Texas Keystone Inc [2015] EWHC 566 (Comm) per Christopher Clarke LJ at paras 22–24, referred to in the 2020 White Book at 44.2.12 p. 1384. The incurred costs relate to the pre-action, issue/statement of case and CCMC phases. The Judge considered the Defendant’s Precedent H, the comments made by Master McCloud upon Cost Management and taking into account all of the circumstances, awarded 70% of the incurred costs, as sought by the defendant.

All in all, I believe a reasonable Judgement based upon bringing an unsuccessful Claim.