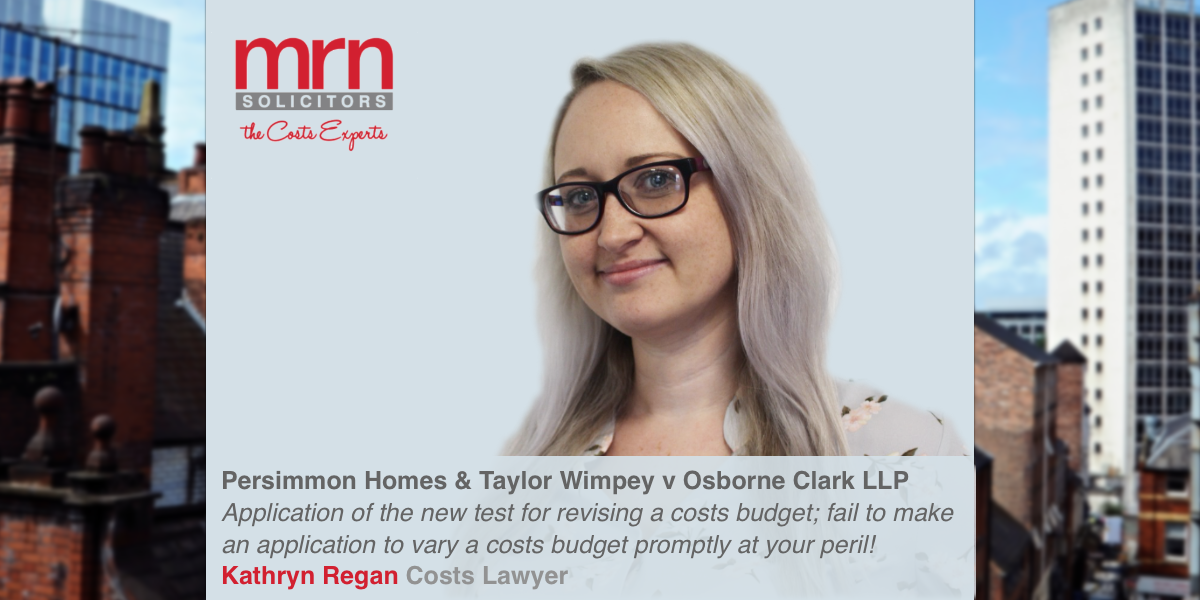 Following amendments to the Rules in respect of revising budgets in October 2020, a recent Judgment of Master Kaye in Persimmon Homes & Taylor Wimpey –v- Osborne Clark LLP has highlighted the need for parties to act promptly when seeking to revise their budget.

In December 2020, the Claimants issued an application to vary their budget in respect of three significant developments:

Prior to this, in December 2019, a Costs and Case Management Conference had taken place before Deputy Master Linwood where the Deputy Master gave case management directions and approved the parties’ budgets. In respect of disclosure, the parties agreed primarily Model C request-led search-based disclosure. A further CMC was to be listed after 8 May 2020.

Following this hearing, the Defendant served a request for further information in February 2020, which was eventually responded to in August 2020.

Disclosure proved challenging and the timetable slipped. On 18 August 2020, the Defendant issued an application for further disclosure pursuant to PD51U. The further CMC eventually took place on 26 August 2020, where orders were made in relation to the already outstanding disclosure and the CMC and Defendant’s application were adjourned to a second further CMC on 7 January 2021. The timetable directed that the Claimants address the then outstanding aspects of their disclosure by 16 October 2020.

Prior to 1 October 2020, the practice direction to CPR 3 provided that each party “shall revise its budget in respect of future costs upwards or downwards, if significant developments in the litigation warrant such revisions… The court may approve, vary or disapprove the revisions, having regard to any significant developments which have occurred since the date when the previous budget was approved or agreed.”

However, the Rules were amended in October 2020:

(1) A party (“the revising party”) must revise its budgeted costs upwards or downwards if significant developments in the litigation warrant such revisions.

(3) The revising party must—

(a) serve particulars of the variation proposed on every other party, using the form prescribed by Practice Direction 3E;

(b) confine the particulars to the additional costs occasioned by the significant development; and

(c) certify, in the form prescribed by Practice Direction 3E, that the additional costs are not included in any previous budgeted costs or variation.

(4) The revising party must submit the particulars of variation promptly to the court, together with the last approved or agreed budget, and with an explanation of the points of difference if they have not been agreed.

(5) The court may approve, vary or disallow the proposed variations, having regard to any significant developments which have occurred since the date when the previous budget was approved or agreed, or may list a further costs management hearing.

This was a substantial amendment, with parties now being required to revise their budget in the event of a significant development and an emphasis on “promptness”. Master Kaye summarised the test as follows:

“The applicant must therefore first satisfy the court that there has been a significant development in the litigation since the last approved or agreed budget which warrants a revision (upwards or downwards) to the last approved or agreed budget; and second that the particulars of the variation have been submitted promptly both to the other parties and the court in accordance with CPR 3.15A (2) to (4).

It is only if the applicant can satisfy the court that it has met these mandatory requirements – the threshold test – that the court goes on to consider the exercise of its discretion in relation to the variation itself and the incurred costs caught by the application to vary in CPR 3.15A (5) and (6). An application to vary therefore involves a two-stage process.”

The submissions made by the parties largely focused on the disclosure related costs. The Claimants argued that their previously approved budget had been based on Model A and B disclosure, as prior to the CCMC this was the approach that had been put forward by the Claimants.

However, the Defendant argued that the Claimants knew of the change to Model C before the costs budget was approved by the Deputy Master on 3 December 2019. At a hearing on 18 November 2019, the Deputy Master had encouraged the parties to focus on Model C request-led search-based disclosure, therefore prior to the hearing of 3 December 2019, the parties substantially agreed Model C requests for the issues for disclosure.

The Defendant contended that the change to Model C was not therefore a change which occurred after the last approved budget.

The Claimant argued that it was “neither reasonable nor realistic” to expect the Claimants to have fully recalculated their costs budget between 18 November 2019 and 3 December 2019, as the adjourned period was used by the parties to work extensively on agreeing Model C.

The Defendant also argued that the first further CMC was not a significant development either, as it was included in the CCMC Order. In relation to the second further CMC, the Defendant stated that it was primarily as a result of the disclosure issues. The Defendant conceded that there may be some justifiable variations such as the request for information.

The Claimant argued that the application to vary was made promptly once the Claimants had a clear view of the scope of the disclosure exercise and its cost and that as a result of the Defendant’s continuing requests for further disclosure it was not possible to prospectively determine the likely costs.

In respect of each of the significant developments, Master Kaye found as follows:

She noted that whilst CPR 3.15A (6) specifically recognises that there may be some incurred costs at the point at which an application is made, the purpose of costs management is to provide the court with the ability to control costs not to enable parties to retrospectively adjust for any overspend or miscalculation in respect of budgeted costs.

However, the Master did note that as the Request for Information was not an anticipated cost at the time the last approved costs budget. The costs could therefore be considered by the costs judge on detailed assessment.

The Master also considered the expanded scope of the disclosure exercise which became apparent in February/April 2020, however she again found the application was not prompt.

As a result, the application to vary the costs budget was dismissed.

Whilst the Master did comment that these costs could be considered on detailed assessment, there remains a risk that such costs will also not be allowed on detailed assessment given the approved budget, therefore your best option is to submit an application to vary a budget as soon as you become aware of a significant development in the litigation.

Furthermore, this case also highlights the need for parties to consider their assumptions at budgeting stage, particularly if there is a delay between the preparation and approval of the budget. If there is a disagreement between the parties in respect of what is required in respect of a particular phase, the advocate dealing with the costs budget needs to be alive to the fact that the Court may not hand down directions that are in line with the assumptions within the budget prepared and should be prepared to seek revision to the budget at the hearing if necessary.