Budget Variations after Trial: All is not lost 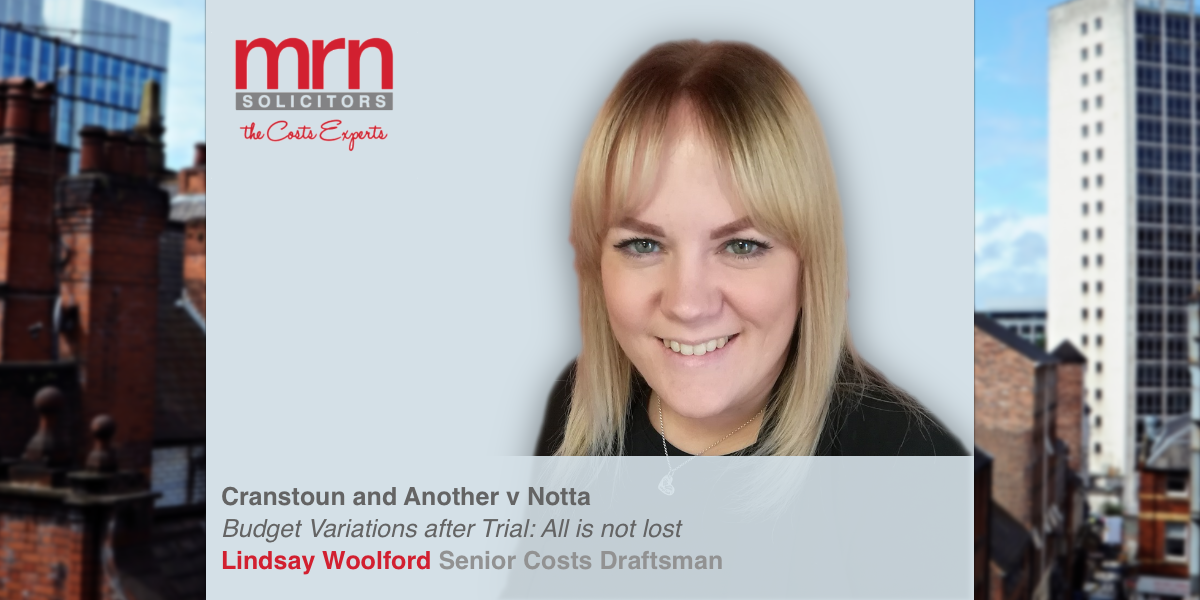 Following the October 2020 amendments to the Rules in respect of budget variations, Mr James Mellor QC (sitting as Deputy Judge of the High Court) considered the circumstances where a successful party has overspent on their approved budget, but has succeeded at Trial in the above matter.

(1) A party (“the revising party”) must revise its budgeted costs upwards or downwards if significant developments in the litigation warrant such revisions.

(3) The revising party must—

(a) serve particulars of the variation proposed on every other party, using the form prescribed by Practice Direction 3E;

(b) confine the particulars to the additional costs occasioned by the significant development; and

(c) certify, in the form prescribed by Practice Direction 3E, that the additional costs are not included in any previous budgeted costs or variation.

(4) The revising party must submit the particulars of variation promptly to the court, together with the last approved or agreed budget, and with an explanation of the points of difference if they have not been agreed.

(5) The court may approve, vary or disallow the proposed variations, having regard to any significant developments which have occurred since the date when the previous budget was approved or agreed, or may list a further costs management hearing.

The claim related to a Dental Costs Sharing Agreement, where it was held that the Claimants were successful at Trial, and following the Trial, the Claimants filed an Application to revise their budget as well as an order for indemnity basis costs. In support of their position on the order for costs, the Claimants’ submissions were that the Defendant’s conduct was unreasonable and took this case out of the norm.

The Claimants had attempted to explore settlement, and the Defendant rejected a number of offers of settlement including an offer following a Mediation. Had the Defendant accepted that offer then he would have been in a much better position than he was post-Trial as the Claimants went on to beat the offer at Trial.

The Claimants sought an award of indemnity costs in respect of two distinct periods: first, from the inception of the dispute until 29th May 2019; second, from the end of the period of acceptance on 21st April 2020 of the Claimants’ Part 36 offer dated 1st April 2020 to the date of Judgment.

The Order for Costs

The Claimants failed in their request for indemnity costs for the initial period “by only a narrow margin” (para 34) however, the Mr Mellor QC commented that once the action was underway, “I consider that the Defendant could and should have been significantly more co-operative … It seems to me his conduct caused a significant increase in the costs and complexity of this action, which would have been avoided by adherence to the overriding objective.” (para 35). An order was therefore made for costs from 1st May 2020 to be assessed on the indemnity basis if not agreed.

The Application to vary the Cost Budget

The Application to vary the budget arose from Counsel’s Skeleton Argument filed in advance of the hearing dealing with the appropriate order for costs, which contained a ‘Summary of Costs arising outside of Budgeted Costs’. The Skeleton Argument also made reference to CPR 3.18 (b) that the Court will “not depart from such approved or agreed budgeted costs unless satisfied that there is good reason to do so.”

“In my view, the promptness (or otherwise) with which a variation is sought may well reflect on whether the revision is or is not in respect of a significant development. Furthermore, I can well understand that it may be difficult to turn one’s mind to a costs budget revision in the lead up to trial when the focus is very much on attending to the issues live in the trial, but it is also important to bear in mind that most costs budget revisions ought to be done on paper, without any significant costs being expended on them, and should best be done in advance of the result being known.” (para’s 50 – 51.)

Notwithstanding the above, he was agreeable that an additional day of Trial involving further input from Counsel and the Expert, together with an additional ½ day dealing with the variation Application, were “significant developments” in the litigation. For that reason, against the £13,886.00 sought, he allowed an increase of £13,807.00.

However, he disallowed an additional £3,726.00 in the CMC phase on the basis that this was not a significant development and “too late”, together with a second variation of £900.00 in respect of an “additional witness” in the Witness Statements phase for the same reason.

It is noteworthy that the Court dealt with the budget variation following Judgment which does not follow recent case law on the point.

It is also interesting to note that as costs were ordered on the indemnity basis from 1st May 2020, technically the Claimants would no longer be constrained by the last agreed or approved budget (Coulson LJ in Lejonvarn –v- Burgess [2020] Costs LR 45 at para 93.) As indemnity costs had already been awarded, “good reason” had already been established pursuant to CPR 3.18

Given the findings of Mr Mellor QC, it remains clear that the ‘promptness’ provision will play a key factor in determining whether the additional costs sought in an Application to revise amount to significant developments. Therefore, it remains of the utmost importance to regularly review costs against the approved budget to determine whether there are any significant developments in the litigation in order for the Application to have the best chance of success.

It will be interesting to see whether the Claimants have ‘lost’ their entitlement to the additional costs sought where the variations were disallowed in view of the indemnity costs award.

If you feel that there has been a divergence from your last agreed or approved Budget, please do contact us to discuss how we can assist