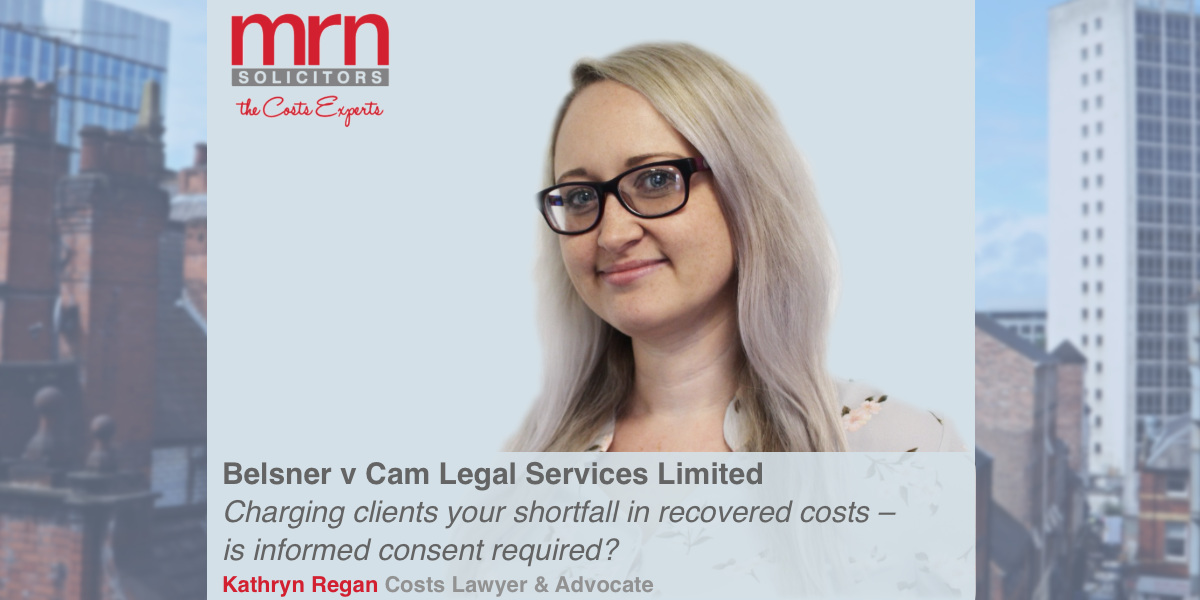 In the recent Judgment of Belsner –v- Cam Legal Services Limited, Mr. Justice Lavender, on appeal, considered the question of whether a firm’s terms of business allowed them to charge more than would have been allowed on an inter partes basis and whether informed consent was required for the client to agree to such a term.

The Defendant solicitor firm was instructed by the Claimant in respect of a road traffic accident claim, which was submitted to the MOJ portal and for which they ultimately recovered fixed costs. The client care letter provided that the Claimant would be liable for a success fee, limited to 25% of the Claimant’s damages, plus any shortfall between the actual costs incurred and those recovered from the opposing party.

The client care letter confirmed that in cases involving road traffic accidents worth less than £25,000, the amount that would be recovered from the opposing party would be fixed by the provisions of the Civil Procedure Rules and that most personal injury claims settle by negotiation after medical evidence and details of financial losses have been obtained. The client care letter estimated the likely level of basic charges (£2,500 excluding VAT and disbursements) in this circumstance. The Defendant’s terms of business confirmed the charges may exceed the costs recoverable from the opposing party, however no cap to the amount of the shortfall or to the total costs that the Defendant intended to charge the Claimant was ever provided.

At the conclusion of the matter, the Defendant recovered £1,783.19 including VAT from the opposing party. The Defendant paid the amount of the damages (£1,916.98) to the Claimant, less £385.50. The statute bill later served showed that the Defendant firm could have charged the Claimant more than they had done, in accordance with their terms of business. The figure of £385.50 was only in respect of the success fee (which was 100% of the basic charges, capped at £25% of the recovered damages).

The Claimant accepted that the Defendant stated in the Client Care Letter, its Terms and Conditions of Business and the Law Society’s Conditions attached to the CFA, that the Claimant could be charged fees in excess of those recoverable from the opposing party, but submitted that this was not sufficient to mean that her agreement to these terms constituted informed consent. The Claimant contended that for informed consent to have been given, this required a full and fair exposition of the relevant factors, and the factor which was not identified to the Claimant was the amount of the costs recoverable from the Insurers.

The Defendant did not accept that informed consent was required, averring that CPR 46.9(3) dealt with the question of reasonableness and whether a client had given an “express or implied approval” to incur an item of cost. The Defendant noted that the costs had been assessed at first instance in an amount greater than that actually charged, therefore the sum claimed could not be unreasonable.

Mr. Justice Lavender accepted that the requirement for informed consent arose due to the fiduciary nature of the relationship. In his Judgment, a solicitor who wishes to rely on CPR 46.9(2) must not only point to a written agreement which meets the requirements of the rule, but also show that the client gave informed consent to that agreement, insofar as it permitted payment to the solicitor of an amount of costs greater than that which the client could have recovered from another party to the proceedings.

Both parties accepted that a solicitor was not required obliged to give a detailed and comprehensive explanation of the provisions of the Civil Procedure Rules and the Protocol concerning fixed costs. However, the Claimant contended that the solicitor was obliged to give some indication of what the limit on recovery might be.

One of the difficulties in the present matter was that there was no overall cap on the solicitor’s charges. As a consequence, there was a potential outcome whereby the solicitor could have charged the Claimant more than the damages she had recovered:

“…the Defendant provided the estimate in paragraph 23 of the Client Care Letter. This was, in effect, an estimate of the basic charges for the work necessary to take the case to Stage 2 and the service of the Stage 2 Settlement Pack, if the claim remained within the Protocol.

The estimate was £2,500 plus VAT. There is a striking contrast between that figure and either:

(1) the figure of £500 plus VAT, which is the amount of the fixed costs which would have been recoverable from the Insurers if the claim had settled at Stage 2 for less than £10,000 while remaining within the Protocol; or

(2) the figure of £550 plus VAT, which is the amount of the fixed costs which would have been recoverable from the Insurers if the claim settled at that stage for £2,250 or less after leaving the Protocol.

If the claim had settled at that stage (and the Defendant acknowledged in paragraph 23 of the Client Care Letter that most personal injury claims do settle at or after that stage) then, on the basis of the Defendant’s estimate, if the claim had remained within the Protocol (and using for these purposes the success fee as set out in the CFA, rather than as reduced on assessment), the Claimant would have owed the Defendant £2,400 (i.e. £2,500 – £500, plus VAT) plus 25% of the damages. In that event, unless the damages were at least £3,200, the effect of the agreement was that the Claimant would have had to pay all of her damages and more to the Defendant. The quantum of the Claimant’s claim could not be known for certain at that stage, but it was not suggested to me that the Defendant could exclude the possibility that the Claimant’s damages would be less than £3,200.”

Mr. Justice Lavender found that if it had been pointed out to the Claimant that, whilst the Defendant’s estimate of costs was £2,500 plus VAT, she might only recover £500 or £550 plus VAT from the Insurers, then this may have affected the Claimant’s consent to the agreement between them. By way of example, Mr. Justice Lavender stated the Claimant may have asked whether her liability could be capped or she may have approached a different firm of solicitors who would cap her liability. He therefore found that this information ought to have been provided to the Claimant.

Mr. Justice Lavender confirmed that informed consent did not require explaining the provisions of the Civil Procedure Rules and the Protocol or every possible outcome of the Claimant’s claim, but rather taking the outcome which the Defendant had itself assumed for the purposes of its estimate of costs and stating what the recoverable costs might be in that case.

We understand that the Defendant intends to appeal this decision, so this may not be the end of this matter. However, it is important for Solicitors to consider what information they are providing to their clients within their retainer documents.

If you intend to charge the client the shortfall between your actual costs and the costs recovered from an opposing party, have you given the client sufficient information to amount to informed consent to such a term? Alternatively, have you agreed to cap your overall charges so that the client knows their maximum liability? If you require any assistance with these questions, please do not hesitate to contact us.