Costs of an executor limited 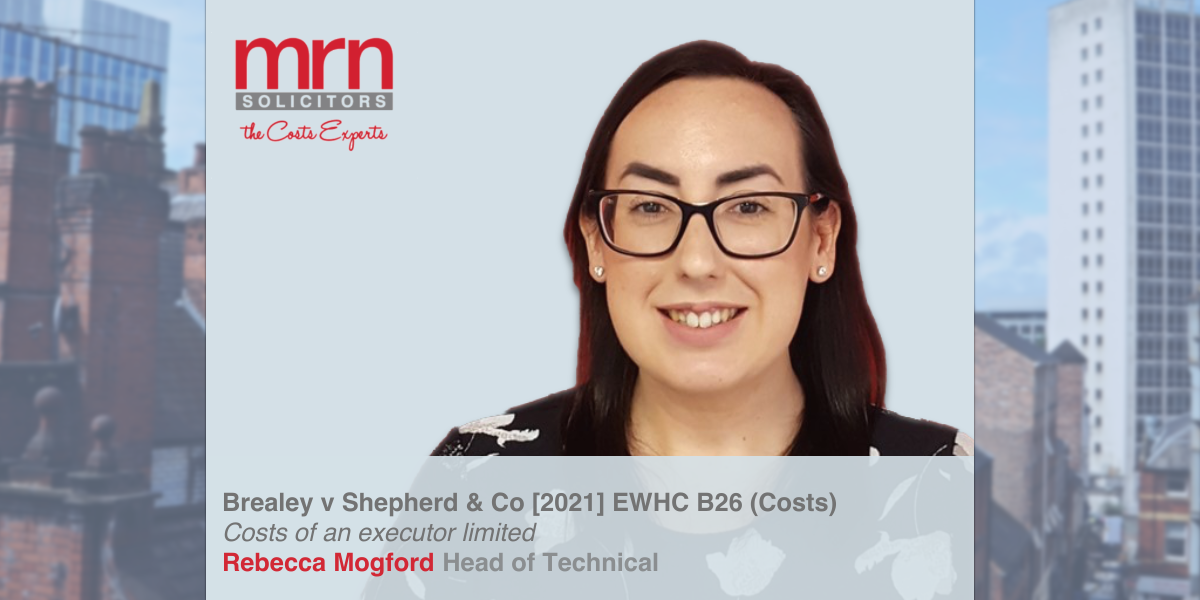 The Proceedings related to a challenge brought by a beneficiary in respect of costs incurred in the administration of an estate. It should be noted that this case has had a number of hearings and there were a number of areas challenged, however, this article relates to the specific issue of administration costs. It is an issue that repeatedly crops up and is one of significant importance to those acting as professional executors.

The issue and concern raised by the Claimant was as to the charges and fees raised by the executor. By way of brief background, the issues revolved around the involvement of Mr Shepherd who was a senior partner of the Defendant firm at the time and was named as one of the executors and trustees of the will in question (together with the deceased’s brother, Mr Hayward).

It was agreed between the parties that the will did not contain a charging clause, it was however disputed as to whether or not the beneficiaries had consented to the executor raising any charges.

It was the Claimant’s case that Mr Shephard was not entitled to charge for acting in his capacity as an executor. To the extent that Mr Shephard dealt with the day-to-day administration of the estate as a solicitor, he would be entitled to charge for this, but the points of dispute made reference to the original reply to the points of dispute which highlighted the difference between Mr Shepherd as one of the executors of the estate and his then partner Ms Sibley, who was dealing with the day-to-day administration. The reply stated that the two roles were very different and there had been no duplication therefore when both Mr Shepherd and Ms Sibley were in attendance at the same time. Other examples of this differentiation are also cited in the points of dispute. Subsequently, the Claimant’s position was that on the basis Mr Shepherd was acting as an executor, those costs should not be claimed within the bill of costs.

The Defendant also argued that both Mr Hayward and the beneficiaries were aware that Mr Shepherd was charging for his fees and acting in the administration of the estate and those fees were approved by both executors. Reference was made by the Defendant to the House of Lords decision in Boardman v Phipps [1967] 2 AC 46 which is cited as an authority for the proposition that where a party acts openly undertaking a fiduciary duty they are entitled to be paid a reasonable fee for their work and / or skill.

The issue here rested entirely as to whether Mr Shepherd could claim for his work as an executor. In this context it was irrelevant whether he ought to be categorised as a professional executor or a lay executor so as to instruct the solicitors.

One of the things that stuck out was the comment from Master Rowley in the Judgement that there was no witness statement provided by Mr Shepherd commenting on the arrangements in the case. Master Rowley’s comments on the lack of statement to me suggest that a statement providing an explanation for example as to why there was no charging clause in the will and to provide an explanation of the arrangements would have been found to be particularly helpful. This is something to bear in mind when issues arise in these circumstances for litigators to consider.

As a result of the lack of statement Master Rowley concluded that the starting point was that the deceased would not have expected her executors to charge for their services. Is that fair? Probably, when taking into account the lack of information pertaining the position to be otherwise and I think we have to accept that is a reasonable assumption for Master Rowley to make.

Master Rowley also considered the provisions of the Trustee Act and the wording of the provisions and potential issues if the Defendant had expanded into a multi-partner practice. However, this was not an issue.  Section 29 of the Act requires a majority of “other trustees” to agree for a professional trustee to be entitled to receive payment in respect of services. Based on the will, there must have been at least two “other trustees” and the agreement of Mr Hayward could never have amounted to a majority even if, as was the case, there was only one other partner at the Defendant firm at the relevant time. Furthermore, Master Rowley cast doubt on the fact that the approval of the invoices by Mr Hayward actually amounted to an agreement in writing to pay Mr Shepherd’s fees as an executor. This is significant and a point that litigators should consider – if that wasn’t enough that what is needed to be able to show there is an agreement? No particular guidance was given on this but it is certainly a point to be considered. In any event, Master Rowley did not believe there was anything before the Court to suggest that the other trustees had ever signed anything to reflect agreement to pay professional fees as required by this provision of the Act.

Subsequently, Master Rowley concluded that there was no charging provision in the will, and there was no agreement by the beneficiaries for Mr Shepherd to charge fees as an executor. The fees were never approved within the terms of the Trustee Act and therefore the only route left would be for Mr Shepherd to make a Boardman Application and Master Rowley felt that the requirements of the Application in terms of evidence was simply not strong enough in this case.

Master Rowley did make further comments that were significant in respect of the guidance from the Court of Appeal. He described the guidance in the case of Tim Martin as “overarching these proceedings”. Of course, that decision essentially limited challenges which could be brought by third parties such as the Claimant here (who was a beneficiary) to the solicitors costs being either (a) ones which relate to work done outside the terms of the retainer and as such should never have been paid by the executors under that retainer or (b) ones which would only be allowable as against the client on the basis of a “special arrangement.”

It was abundantly clear to Master Rowley that the charges rendered by the solicitors for Mr Shepherd’s time as an executor fell into at least one of category (a) or category (b). They were not within the retainer documentation and couldn’t be brought into the retainer by any of the other routes put forward by the Defendant in this case. To the extent that they were payable by the executors that would only be by way of a special arrangement and as such there would be no defence to a challenge by a third party such as the Claimant in this case.

As a result, Master Rowley ruled that the fees of Mr Shepherd in his role as executor rather than solicitor, were to be disallowed. Any fees which were claimed as work done by Mr Shepherd as a solicitor would require an explanation at the detailed assessment hearing.

Where does this leave professional executors? It is clear that this issue is significant and the comments by Master Rowley regarding there being an approval in respect of fees within the terms of the Trustees Act is important and shouldn’t be forgotten. The fact that the Claimant knew about Mr Shepherd’s involvement could not of itself justify a charge to the estate and that is something for executors to consider regarding fees and approval of the same.

Whilst clearly this is a significant decision, it is not wholly unsurprising and brings a few reminders to those dealing with estates of the potential ramifications of not getting things right in terms of fees.