Costs of Expert Evidence, Indemnity Costs and Pre-Judgment Interest all rolled up into one 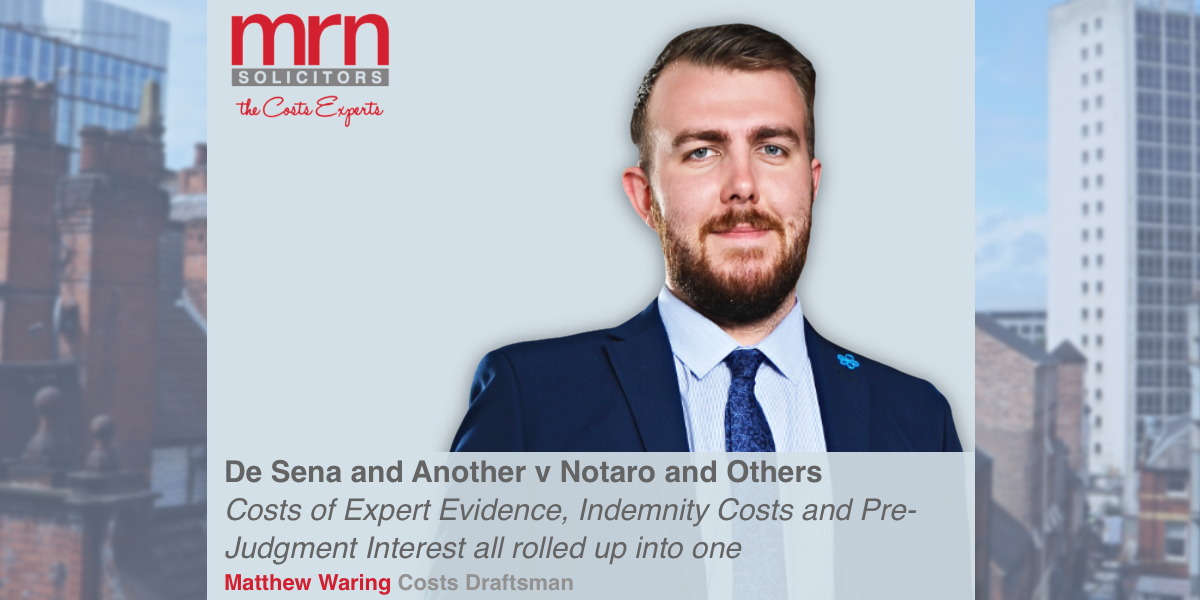 The Court in this matter disallowed the costs of the inadmissible evidence under CPR 44.3 (1)

(a) on the standard basis; or

(b) on the indemnity basis,

but the court will not in either case allow costs which have been unreasonably incurred or are unreasonable in amount.”

The reason for the expert evidence being in admissible was due to the fact that the expert witness did not have the necessary experience to be deemed an expert in the subject matter, the third Defendant argued that they needed to strike a balance when choosing an Expert to ensure the expert was able to comment on the areas of expertise of the two Partners who were involved in the demerger.

“If a clinical negligence case involves allegations against both a gynaecologist and an intensivist, you probably need two experts, not one”

The first and second Defendants sought indemnity costs on the basis of 6 grounds:

In relation to ground 6, the Court was quick to distance themselves from such a blanket approach, with HHJ Matthews confirming

The grounds on which the third Defendant sought indemnity costs were:

The grounds on which the fourth Defendant sought indemnity costs were:

The Court was with the Defendant on all grounds save as to ground 3, the Court was of the opinion that the delay to engage in mediation was reasonable given that the mediations was sought with the first and second Defendants in the first instance.

The first and second Defendants were successful in securing a payment on account of costs of 70% of their pre-budget costs and 90% of their budgeted costs, as opposed to the offer of 50% and 80% from the Claimants. However HHJ Matthews also recorded that

“In the present case, however, costs will be assessed on the indemnity basis, which is more generous, because there is no requirement of proportionality, and the benefit of any doubt as to whether costs were reasonably incurred or reasonable in amount is given to the receiving party. In addition, the court may more easily find good reason for the costs as assessed to exceed the budget.”

The third Defendant sought to make submissions that due to there being an Order for Indemnity Costs that an Order for a Payment on Account should be referenced against the actual costs spent rather than the budgeted costs.

The Court did not agree, HHJ Matthews confirming

“An award of indemnity costs does not make the assessment at large. It is still necessary to show that the costs were reasonably incurred and reasonable in amount.”

The Court was not minded to stray beyond the budget set and therefore referenced the Payment on Account against the third Defendant’s budget.

The Court then considered the relevant date to award interest from and the percentage rate to be applied. When considering this the Court referred to CPR 36.17 (1) & (3), CPR 442. (6) (g) and the case of Jones v Secretary of State for Energy and Climate Change [2014] EWCA Civ 363.

The Court accepted the first and second Defendants’ evidence regarding the borrowing facility for payment of their Solicitors invoices, evidence which the Claimants disputed but the Claimants did not dispute the Defendants entitlement to interest. Therefore interest was awarded from the date of payment of the invoices at 2% above the base rate when taking in to account the evidence put forward and the principle in the case of Jones of “having regard to the class of litigant to which the relevant party belongs”.

The Claimant advanced similar arguments in relation to the fourth Defendant, the Court awarded a rate of 1% above the base rate in line with the conclusions reached above.

The Claimant’s also submitted that the interest under the Judgment Act 1838, which runs at 8% only came into effect on a “Judgment Debt” as per s17 Judgments Act 1838. The Court agreed and as such the Judgment Interest was only to run from the Order rather than the handing down of Judgment.

Quite a few costs issues were considered in this case which act as reminders. When instructing an Expert Witness ensure they are properly qualified and experienced to report upon the subject matter. Engage in ADR, have evidence to support your allegations and do not make frivolous claims, review the merits of the case at each stage of the litigation such as upon receipt of the Defence, Disclosure etc. An Order for Indemnity Costs is a good reason to depart from the approved/agreed Costs Budget but that it is not a carte blanche to incur costs freely, costs still have to be reasonably incurred and reasonable in amount. It is possible to obtain pre-judgment interest, however be prepared with evidence to support your claims.