Conduct criticisms lead to the ultimate sanction for a receiving party 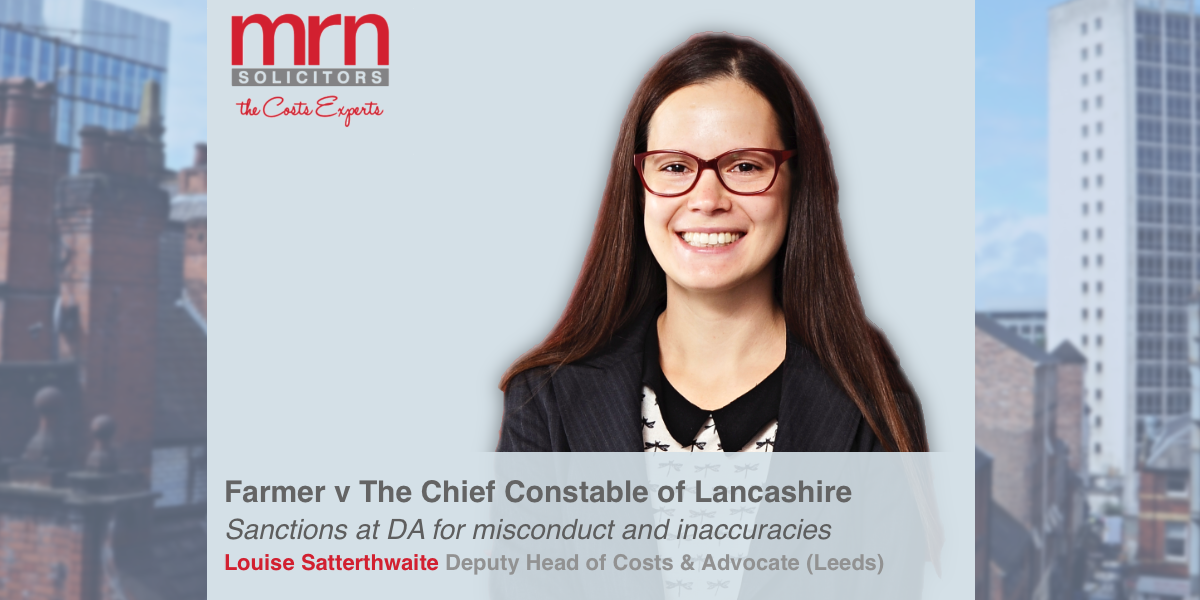 This matter related to a claim for costs by way of a detailed assessment hearing before the Court for a successful Claimant’s Bill of Costs.

The Defendant had applied for costs to be disallowed in full on the basis of the Claimant’s conduct in the assessment proceedings.

One of the primary issues raised by the paying party was the retainer, the Defendant seeking with the Points of Dispute confirmation that a valid and enforceable retainer was in place for the entirety of the claim.  The bill indicated that the claim was funded by two retainers, with an initial CFA covering the first three parts of the Bill up to the solicitor leaving the firm, a second CFA covering the final part of the Bill.   The Defendant’s challenge to the retainer also sought strict proof that cancellation notices were included, as the agreement had been entered into at the Claimant’s home.

The Claimant maintained throughout the assessment proceedings (within the Bill served, the Replies served and on day 1 of the assessment hearing) that the original CFA was enforceable and therefore continued to pursue recovery of the costs and success fee incurred under that agreement.

Of course in any event this would have been what Master James termed to be a “colossally bad bargain” on the part of the Claimant and would have resulted in something of a conflict of interest with his solicitors. In addition, the Claimant had signed a notice of cancellation for the second CFA in June 2015, and had not signed a new agreement.

As a result of this in depth review of the funding position it was ultimately found that there was no enforceable retainer to cover parts 1-3 of the Bill, thus meaning total costs of those parts were unrecoverable.

A second issue on here related to the hourly rates which had been claimed – those claimed within the Bill of Costs exceeded those outlined within the retainer and thus constituted a breach of the indemnity principle. After uncovering this issue with the rates claimed in addition to the retainer problems, the Master ordered an adjournment and disclosure of all relevant documentation to review further.

The hearing was relisted for conclusion and ahead of that hearing the Claimant served a witness statement from their Costs Lawyer seeking to apologise for the errors in the Bill and providing a revised Bill which purported to remove the erroneous costs claimed.  The value of this Bill was around a third of the Bill originally served.

Costs ultimately claimable on the basis of a valid retainer in place and the correct rates applied were £66,773.10, although this could only be arrived at after some considerable further time spent by the assessing Judge to review the revised Bill that had been lodged where the arithmetic remained incorrect.  The accompanying witness statement that had been lodged by the Cost Lawyer also referenced incorrect figures and content.

It was noted at this point that in fact the matter would have fallen well within the bracket for a provisional assessment and thereafter costs would have been limited to £1,500.00 plus vat and court fee.  Instead four days of court time had been set aside for the detailed assessment.

Master James also noted something of a supplementary issue when considering the amended Bill served, which was that costs of an interlocutory application had been claimed within the Bill which had specifically been excluded from the scope of costs to be submitted to the Defendant for payment, as set out within the retainer with the Claimant.

In view of the numerous errors made here and the conduct of the receiving party in seeking to maintain their claim for costs which simply were not supported by a retainer and/or were erroneously claimed under the terms of the purported retainer, the paying party sought disallowance of the entire entitlement to costs.  The receiving party sought a penalty of disallowance of the Bill preparation and checking fee only.

When removing the costs not covered by a retainer and when reducing the hourly rates applied to those reflected within the retainer, the Bill was reduced to 34% of the Bill as originally lodged.    The Master was conscious that there had been “numerous examples of documents, specifically the Bill, the Replies and the witness statement, which have been signed without any proper regard for the need to fact check and ensure that matters were dealt with properly”.

It was considered that the Receiving Party’s conduct up to and including the witness statement served by their Costs lawyer was in breach of the CPR, particularly CPR 1.3 where the parties are required to consider the overriding objective.

In view of this conduct the Master disallowed the remainder of the Bill and ordered that the Claimant pay the Defendant’s costs of assessment and repay previous interim payments made on account of costs.

Whilst it was appreciated that there had been a lack of dishonesty of this case, the Master was willing to apply a harsher sanction because of the failure on numerous occasions by the Claimant to assist the Court or to properly check the documentation that was being lodged to ensure accuracy of the same.  Furthermore the issue of the retainer and contractual points raised should and could have been addressed prior to attending the assessment hearing – the Claimant refused to provide disclosure of the retainer documents prior to the hearing and thus there was no opportunity for the point to be considered in any further detail by the Defendant at this stage.

This is another example of the Court’s willingness to apply a harsh sanction to a receiving party where there has been a failure to conduct the assessment proceedings in a productive and appropriate manner, following the case of Gempride Ltd v Bamrah & Anor [2018] EWCA Civ 1367, effectively leading to use of significant Court time to establish where costs have been claimed which simply should not and could not be recovered on an inter partes basis.  Inaccurate documentation was served at the outset and thereafter when amended to present to the Master at assessment.  This highlights the importance placed on time spent to ensure accuracy of the documents served, and also in engaging properly in the assessment process prior to recourse to the court.  Failure to do so could indeed lead to a disallowance of all costs claimed as seen here.

At MRN the accuracy of any document produced is of paramount importance and steps are taken to ensure, as a primary step, that the funding position is clear and can be identified as such at an assessment hearing.  Within the detailed Bills of Costs produced we ensure that within the narrative a costs note is included which sets out the funding position and from which all parties can be clear as the matter moves forward.  Where MRN will deal with conduct from initial preparation and service of the Bill to providing advocacy at the assessment hearing, a full knowledge of the case will be guaranteed and applied to all aspects of the assessment proceedings and issues raised therein.