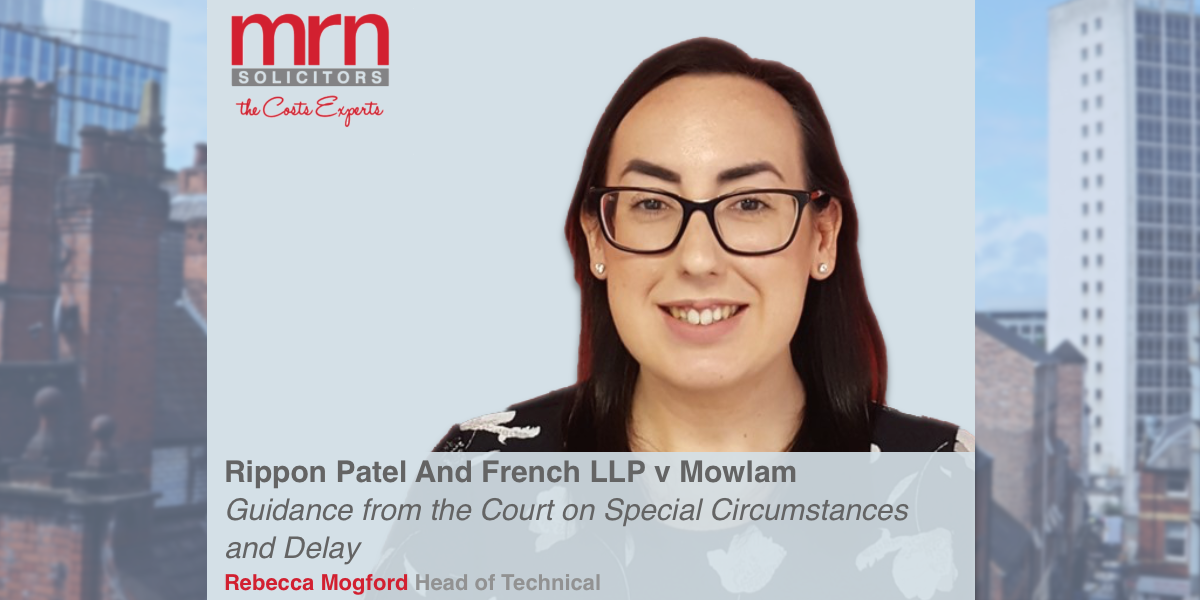 The recent case of Rippon Patel And French LLP v Mowlam [2020] EWHC 1079 (QB) has given us a number of decisions on a variety of important issues in the context of Solicitor own Client disputes.

The Appellant in this case was a firm of Solicitors and the Respondent was a former client responding to a Part 8 claim for Detailed Assessment of the Appellant’s Bill of Costs.

At first instance, Master Nagalingam found that the Bill hadn’t been paid (despite hearing arguments that it had been) and that special circumstances existed such that a detailed assessment pursuant to Section 70 of the Solicitors Act 1974 should be carried out. There were disagreements between the parties regarding whether part-payment of the invoice meant that the same was sufficient. However, the Master held the Respondent had agreed to part payment of the sum owed to the Appellant, pending resolution of what sum was actually owed and whether that sum included VAT and that on that basis, the Master found that the bill had not been “paid” for the purposes of section 70(4) SA 1974.

The Appellant appealed on the grounds that:

As can be seen above, there were a number of grounds that the Appeal was based on and we have produced a number of brief pieces with analysis on the most relevant elements.

Background to the case

The bill in issue was dated 17 September 2015 and was for a total sum of £78,000 (£65,000 plus £13,000 VAT). By email the same day, the Respondent disputed that the fees billed had been agreed. He did not, however, seek a detailed assessment of the bill within a month (in which case, an assessment would have been ordered under section 70(1) SA 1974) or within a year from the bill’s delivery (which would have given the court the discretion to order an assessment under section 70(2) SA 1974).

During the mediation hearing, Counsel then acting for the Respondent had explained that, while his client’s costs “were more than £65,000”, the Respondent’s lawyers – the Appellant at this hearing – “would be happy to cap the costs at £65,000 for the purposes of a settlement”. It was in that context that HSA made the offer that ultimately appeared in the Settlement Agreement.

In the Appellant’s attendance note of the (otherwise privileged) discussions that then took place between the current parties at the mediation hearing, it was recorded as follows:

“… The sum of £140,000 was acceptable to Mr Mowlam since it would include the £75,000 which he wanted to settle the case and which he had confirmed in one of his emails … a day before the mediation and also in an earlier email …. Our costs were estimated at £65,000 (as stated in the Costs Schedule attached to the Allocation Questionnaire and agreed and approved by Mr Mowlam) ….”

The Master observed the settlement ultimately reached with HSA gave the Respondent £80,000 in damages (slightly more than his £75,000 minimum) after payment of the £65,000 costs referenced in the agreement.

The Master did not consider the Respondent would have been unaware that his solicitors would have to charge/apply VAT but found the settlement agreement was ambiguous as to whether VAT was already included within the stated figure for costs. Observing that the Respondent had “brought this action to recover damages, not to avoid paying VAT on legal costs”, the Master considered the relevant question was how much he had expected to recover in damages, noting that “[on] the face of it the balance between the global figure and the deducted damages leads to a costs figure”.

The Respondent first raised his disagreement with the Appellant’s bill on the day of its delivery. By email to the Appellant on 14 December 2015, he further detailed his position as follows:

“You will recall, when we discussed the down side of my likely legal costs in this matter, you estimated your costs at a maximum of £30,000 at your standard charge out rate. Whereas Radcliffes Le Brasseur [the solicitors for HSA] were estimating their likely legal costs to be in the region of £65,000 at their standard charge out rate for a top London property lawyer in a prestige practice. You stressed that this was the figure I should expect to pay if we lost the claim. Whereas we agreed that your costs estimate should match theirs, pari passu, for approval by the Court, although we both agreed your actual costs would not reach this level.

I am not seeking to re-negotiate your costs, simply to keep to what we originally agreed. …”

It is important to note that in cases involving the Solicitors Act if the Court finds special circumstances exist it has a discretion under Section 70 (3) of the Solicitors Act 1974 to make an Order for assessment of the bill.  Clearly this can be crucial for parties, particularly if a right to assessment is unable to be obtained in another way. In exercising that judicial discretion to be able to make an Order for assessment the question of delay may be relevant where that has given rise to significant prejudice.

In this case the Respondent first raised his disagreement over the bill that had been delivered to him on the day he received the same.

The Master had found that there were “special circumstances” because the Respondent had raised an arguable point as to the terms of the settlement agreement and the level of remuneration for costs out of the total monies received for damages and costs. That, alongside the uncertainty as to the costs incurred at the point of settlement led the Master to believe “special circumstances” had been demonstrated such that the Respondent was entitled to an Order for assessment.

Mrs Justice Eady said that it was a value Judgement made by the Master. The issues that had been raised both as to the overall level of costs billed by the Appellant and as to the Respondent’s understanding of the costs position (including how this was to be addressed so as to not impact upon his overall damages) were factual matters. That subsequently made this other than a “run of the mill” case as indicated as being required regarding “special circumstances” in the Falmouth House case and gave rise to special circumstances for the purposes of Section 70 (3) of the Solicitors Act 1974.

The Appellant contended that the Master had failed to take into account a 3 year period of delay when considering whether “special circumstances” existed in the case. In this case the Respondent had given a very early indication (in fact as early an indication as possible!) of the dispute between the parties and had known of his right to seek an assessment. It was the Appellant’s case that there was no good reason for the delay, which had given rise to a loss of interest on their part.

However, it was apparent in his decision that the Master did not consider that the question of delay should impact upon the making of an Order for assessment but had taken it into account on the question of costs.

Mrs Justice Eady considered that there was some justification for delay, however not the whole period of delay. It was the Appellant’s case that the delay had plainly not been caused or contributed to by themselves. However, the Court did not believe that there had been any material prejudice to the Appellant occasioned by the delay. The argument that the Appellant advanced regarding loss of interest had not even been quantified, the Court however noted that this was likely to be minimal in any event. The Appellant had said that they faced prejudice in that it now had to engage in the process of Detailed Assessment that it didn’t feel it should have to engage in. The Court were firmly of the view that the prejudice of having to engage in the Detailed Assessment process did not arise from any delay on the Respondent’s part. In these circumstances, the Court found that it was well within the Master’s discretion to find that the delay in this case had not been a factor that impacted on the making of an Order for Detailed Assessment.

As for the suggestion that the Master ought to have limited the assessment solely to the question of VAT, that issue failed to engage with any of the Master’s reasoning on “special circumstances”. The Master didn’t base any of his findings solely on the issue of VAT but saw this issue as something that was interwoven with the broader question raised as to the level of costs incurred at the point of settlement. In the circumstances Mrs Justice Eady could not see how the Master could be said to have erred in failing to limit the scope of the Detailed Assessment. It was highlighted further by the Court that the suggestion of limiting the Detailed Assessment on this point had not previously been made by the Appellant and subsequently it was hard to see how it was a direction that would follow from the Master’s reasoning.

The Appeal was dismissed, however, for practitioners this case is helpful in providing further guidance on the issues of delay, special circumstances and alternative terms for assessment.

The commentary the Court has provided on the issue of special circumstances and delay in particular will hopefully serve as a reminder about where the Court sit on issues of doubt with lay client’s. Hindsight, as we know is a wonderful thing, our advice is to try and avoid being in a position where in hindsight more information or more detail would have been given to lay clients. That being said, we have seen a couple of cases recently where lay clients are putting practitioners to an enormous amount of work in respect of costs/fees/credit control/invoicing which of course in line with Breyer Group Plc & Others v Prospect Law Limited should not be charged to clients. This, in light of the current pandemic, might well increase as purse strings tighten. If, as we suspect, this trend starts to increase we would expect to see an increase in disputes arising and our recommendation is to try and keep lines of communication with clients open to enable discussions to continue.