Ho –v- Adelekun, Where are we with Qualified One Way Cost Shifting- Next stop the Supreme Court ? 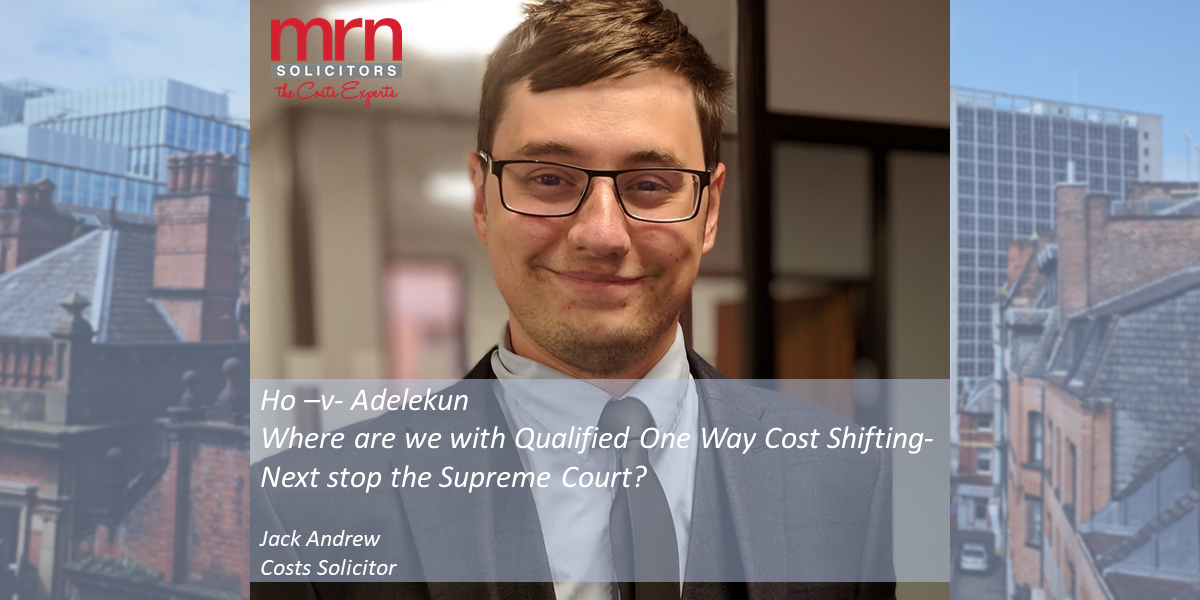 Qualified One Way Costs Shifting (‘QOCS’). A topic revered by any cost practitioner and one that does not seem to be going away any time soon.

The above case previously proved very helpful assistance with respect to answering the question whether it was possible to contract out of fixed costs, and indeed, reference is made to our own previously prepared article on the matter[1]. However, recently the case has been in the Court of Appeal in connection with other cost issues.

These issues are namely the topics of QOCS and setting off costs. It would seem following the earlier decision of HHJ Wulwick, there arose a principal dispute between the parties in the case with regards to the set off of costs. The Defendant on one side, arguing that they were allowed to set off their entitlement to costs from the Claimant against the liability for the Claimant’s costs of the claim. Whereas the Claimant on the other, arguing that there was no such jurisdiction to sanction a set off, given this was a QOCS matter.

Now, whilst the provisions for QOCS are contained solely in CPR 44, it is abundantly clear the rules are not transparent / readably easy to follow and whilst a handful of cases have passed seeking to provide clarification, with varying degrees of success, no such case has yet arrived providing practitioners with the tools they would need to confidently address the issues in practice with absolutely certainty.

Looking at the parties arguments in the case, they can be summarised as follows:-

The Claimant contended that CPR 44.12 ‘Set Off’, did not apply in this case because it was a QOCS case. Furthermore, it was argued Section II of CPR 44, represented a ‘self-contained code’ akin to Part 36, which, provided a Claimant with protection(s) from having to bear a Defendant’s costs other than in very particular circumstances. Those particular circumstances being contained in CPR 44.15, CPR 44.16 and CPR 44.14, where a Defendant can only enforce a costs order up to ‘the aggregate amount in money terms of any orders for damages and interest made in favour of the Claimant’.

The Defendant contented that the Court of Appeal was bound by the decision of Howe v Motor Insurers’ Bureau [2017] EWCA Civ 932, for which it was held that the Court could and should, provide for costs awarded to the Claimant to be set off against any costs orders in favour of the Defendant by use of the Court’s power to award costs under s.51 of the Senior Courts Act 1981.

The Defendant’s argument was ultimately favoured following a very comprehensive assessment of the issues by the Court, although, what is clear from the Judgment, is that the Court disagreed with the analysis in Howe and only followed the decision, due to being bound. Permission was however granted to appeal to the Supreme Court and also an invitation extended to the Civil Procedure Rules Committee to consider whether a costs set-off should be possible in a QOCS case. Hitherto, this will more than likely not be the last time we hear from this case, with a final instalment potentially being inbound from the Supreme Court.