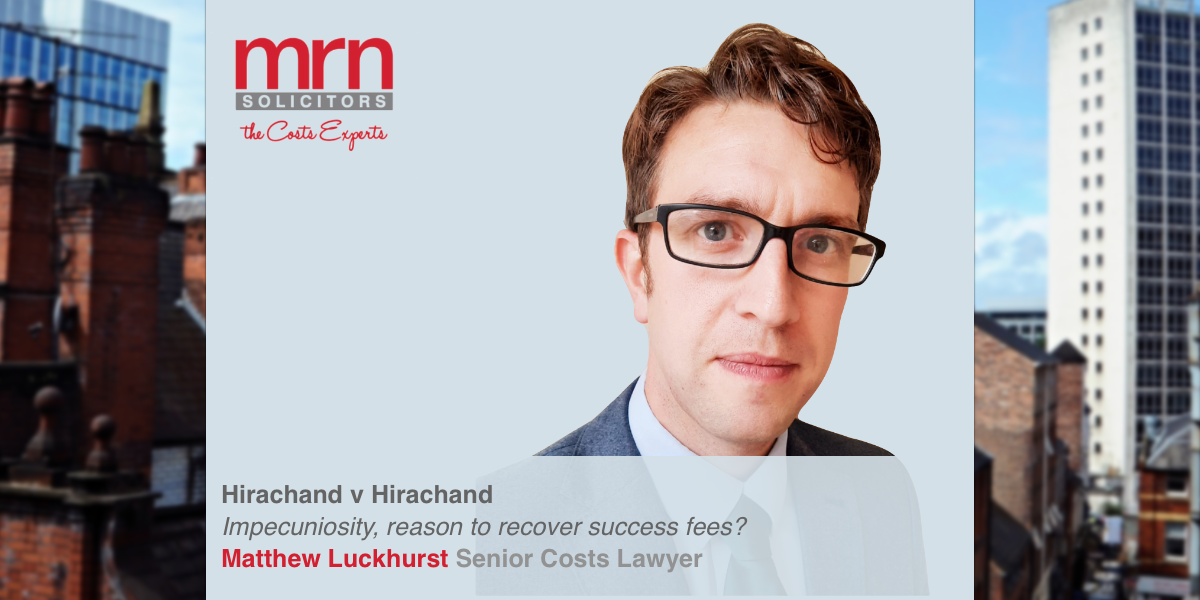 The recovery of success fees on the inter partes basis, save for a few types of cases, was effectively banned by virtue of the introduction of s.58A of the Courts and Legal Services Act 1990, in 2013 and the subsequent extension of the regime. However, the Court of Appeal in Hirachand – and – Hirachand [2021] EWCA Civ 1498, determined a success fee could be recoverable from the paying party by a different means.

The appeal related to a claim that was bought under the Inheritance (Provision for Family and Dependants) Act 1975. The Respondent, following the death of her estranged father, issued a claim against the sole beneficiary of her late father’s will for maintenance. The Respondent, in 2018, entered into a CFA with her solicitors, which provided for a success fee. The Appellant, for reasons unknown, failed to engage in the claim. At a hearing determining the level of the maintenance award, the Judge awarded the Respondent £138,918. However, this amount included an equivalent of a 25% success fee, £16,750, which the Respondent would owe to her solicitors upon a successful conclusion of the claim. At this juncture, it is important to note the Judge did not award the Respondent £16,750 in respect of costs, but it was part of the financial maintenance remedy.

The Appellant appealed on two grounds; the first relating to procedural unfairness (which failed); and the second related to the Judge erring in law by including provision of £16,750 within the maintenance award.

The Court of Appeal considered and weighed the arguments. On the one hand to allow a recovery of the success fee would be in direct contravention of the Courts and Legal Services Act, but on the other hand, if £16,750 was not included within the maintenance award, the Respondent would be required to pay the success fee herself, resulting in physically receiving a substantially less amount than the Court believed she needed in respect of maintenance.

The Court of Appeal determined that in certain circumstances, the Court was correct to include the allowance of an element of the success fee within the maintenance award. However, the Court were at great pains to emphasise that the allowance of a de facto success fee within the maintenance award should only be allowed if the Claimant had no other option but to instruct solicitors by way of a CFA.

Nevertheless, by allowing the recovery of a de facto success fee within the maintenance award, the Court has caused issues moving forward. Does the Claimant now need to inform the Defendant they are acting under a CFA and the percentage amount of the success fee? Will the Court now need to know about the existence of the CFA, before it determines the maintenance amount? How does a Defendant determine if a Claimant was right to instruct solicitors by way of a CFA and should it factor in a quasi success fee in any offers? Does the Court’s Judgment extend to personal injury cases where the Court has to determine the allowable amount for future care?

Whatever the future holds, at present, Hirachand is a boon to potential Claimants in financial maintenance cases, which, absent a CFA with a success fee, would not be able to bring their costs.