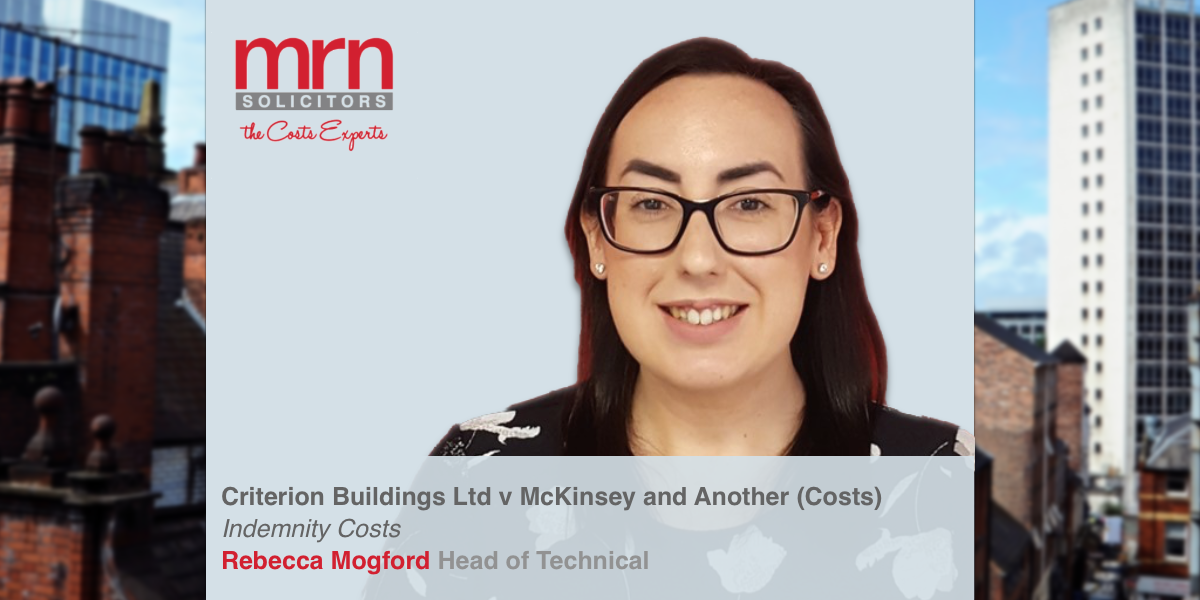 This was a case involving a dispute in respect of what award for costs should be made by the Court. There was an agreement between the parties as to the sum to be paid on account, however, what was not agreed was the basis of the assessment. There were other issues relating to permission to appeal and time for lodging an appellants’ notice that we will leave to one side.

The issue surrounding costs related to whether indemnity costs was an appropriate award against an unsuccessful party to litigation where the costs claim was a contractual one under the terms of a lease.

This question causes a “knock on effect” as to in reality how much of a difference a receiving party would see in pounds and pence with an indemnity costs order compared to a standard costs order. However, this is a different matter and one that we will look at separately.

The difference between the two basis’ is that on a standard basis, costs are recoverable only if they are proportionately incurred and proportionate in amount.

The claim involved a lease (underlease and supplemental lease) which had a clause that the Defendant had covenanted to pay all the lawyers’ costs of proceedings to recover arrears of a service charge. The clause contained covenants to pay costs and expenses, including solicitors’ costs, however, there was use of slightly different terminology.

In relation to the underlease and the further lease, the reference was to expenses “properly incurred” by the landlord. In relation to the supplemental lease, there was no limitation to expenses “properly” incurred. Instead, the covenant was to pay “all costs, charges and expenses which the Landlord may from time to time incur …” But the supplemental lease was for a term of only a little more than six months, so the amount of sums claimed in the proceedings attributable to that lease were modest.

HHJ Matthews said in his judgment that whilst the phraseology in the documents did not refer expressly to an indemnity, “it corresponds more closely with assessment upon the indemnity basis than upon the standard basis”. This was because of the obligation on the lessee to pay ‘all costs and expenses …. which may be incurred’.

The contract contained an agreement between the parties that certain costs would be paid by the tenant to the landlord. Subsequently, HHJ Matthews said it was a factor to be taken into account in considering whether, in the exercise of the court’s discretion, there should be an order for costs on the indemnity basis.

Under CPR rule 44.3(4) the court must take into account the parties’ conduct and any admissible offer to settle the proceedings.

The conduct of the Defendants was said to include conduct which took the case out of the norm. It included an unrealistic perception of the strength of the Defendants’ defence to the claim, the pursuit of the External Works issue up to the morning of the first day of trial, when it was abandoned, the abandonment at trial of the Fire Lifts issue and the Miscellaneous Items issue, and the alleged weaknesses of the Defendants’ case on the four issues on which they fought and lost. In addition, there was a time-limited Part 36 offer which the defendants did not accept.

HHJ Matthews highlighted that just because a party has significant weaknesses to their case that in itself did not justify an award of indemnity costs to the other side. He highlighted that even when a party loses, and even loses badly, that can simply be the nature of litigation. However, in this particular case there was more to the case than simply losing, there were failures to advance evidence in support of their case – which appears to the distinction that HHJ Matthews was able to draw between conduct leading to a party losing and unreasonably advancing a position during litigation without supporting evidence leading to a party losing.

Here, there were points raised by the Defendants however no expert evidence was produced in order to support the position subsequently this (along with the fact that there were arguments raised that had not been put before) was felt to be a failing in the conduct of the Defendants. However, unfortunately this was not deemed to be uncommon, and HHJ Matthews did not feel that would be enough to justify indemnity costs. This was again, as we have recently seen in other cases another example, of the high threshold of indemnity costs when looked at in isolation.

The Claimant, however, successfully persuaded HHJ Matthews that when you took the conduct point, together with the weaknesses in the case, the fact that a time limited offer had not been accepted and the contractual point that it was within his powers to exercise his discretion and award indemnity costs against the Defendants.

Whilst the case highlights again the high threshold for indemnity costs, it should provide comfort to receiving party’s that the Court will take into account relevant factors in considering a request for indemnity costs. Paying parties should also consider this case a timely reminder that conduct can create a “snow ball” effect and the Court can and will award indemnity costs.