New Guideline Hourly Rates confirmed: Does your retainer allow you to take advantage of the increase? 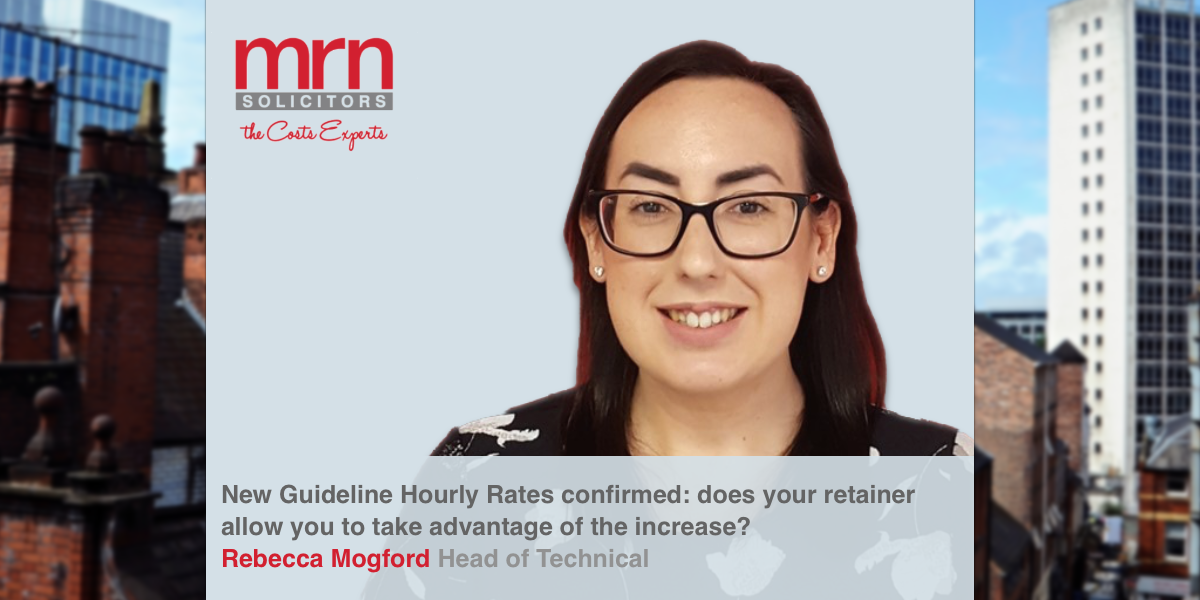 Hourly rates is always one of the topics that unsurprisingly piques the interest of most litigators. Regardless of which area of law you work in, hourly rates are never (or should never be) far away from the forefront of your mind.

The long-awaited CJC report that was released in January 2021 was seen by some commentators as somewhat of a damp squib. After all, the rates proposed were below those awarded in PLK (20% enhancement) and Cohen v Fine (circa 35% enhancement) which had set the bar high in recent times.

If you were to ask a sample of litigators if they were pleased that the proposals have been recommended, the answer would likely be a resounding yes. If you were to ask the same sample whether the increase is commensurate for 10 years of no increases, then the response is not likely to be as punchy or resounding.

However, regardless of whether your views on the recommendations were that they were too much or not enough, the report does give some clear encouragement to litigators and provides clarity on certain issues.

It was never going to be that every party or litigator was going to be happy, nor was it going to be able to allow for every definition or avoid all arguments on hourly rates. However, it is a positive spring board from which we should all be encouraged to work from and with.

According to the report, 103 responses were received and there were a number of criticisms including that the review should have been in the wider context of civil justice reforms as well as awaiting changes in FRC, HMCTS reform programme, changes in business models and the effect of home working. Whilst it is clear that home working is likely to have a more prevalent place in our “normal” working life moving forwards, it is unrealistic to be able to assess the impact of that shift within a short space of time. However, the report reminded us all that the above aforementioned areas were not factors that could be considered. Evidence had been sought on data from costs judges who have experience and expertise in reflecting what is reasonable and proportionate in an hourly rate. The evidence was to be of the rates allowed on either detailed or provisional assessment. This was coupled by the argument that there was a history of difficulty in obtaining good evidence from firms and companies on expense of time (as seen in 2014). Noises were also made regarding market inflation, however, it was noted that the 2010 GHR could not be taken as a baseline as they were historic rather than evidence based and any use of these would be based on a flawed premise.

Clearly there are arguments for and against the methodology, there were suggestions provided within the 103 responses that appeared (in principle) to have solid potential in providing data that would assist. However, it was accepted in the report that it would be impossible when providing GHR’s to cater for every situation/area/claim type and that there would be scenarios where there may not be a representative of the rate normally expected to be seen in those types of claims or regions. The report also made it clear that the issue of rates must be left to the good sense of negotiating parties and if necessary an assessing Judge.

However, regardless of the above, the approach of the committee had to remain consistent and in line with what they were approached/tasked to do and on that basis only. That being said, there are certainly responses and suggestions provided which in my opinion could be re-considered ahead of any further review on hourly rates.

What does the final report tell us?

Whilst the final report could not be said to be particularly short (84 pages plus appendices), here are the headlines that we feel we feel are likely to be of interest;

There were lots of noises made by practitioners regarding the respective issues on banding and location. The report confirms that the recommendations should be adopted. So what impact does this have? Band 3 is now abolished which will come at no surprise to anyone. The London Borough of Kingston upon Thames is now regarded as London 3 as opposed to Band 1. Kent, East Sussex, West Sussex and Surrey all become Band 1 Counties. Other areas stay as they were with Band 1 and Band 2 remaining.

One of the themes throughout the report and recommendations has been the timely reminder of what or when these GHR’s are meant to be utilised for. The confirmation , or re-iteration, provided in the report that the GHR’s are intended to be a starting point for those faced with summary assessment, and that they may also be a helpful starting point at Detailed assessment will be widely welcomed.

The report makes it clear, if the case warrants an increase or enhancement on these GHR’s then the Court have the jurisdiction to allow that and that is my experience. This increase in GHR should not be used by paying parties as an excuse not to allow or offer enhanced hourly rates on cases. The report reminds parties that GHR are only one “lever” in assessing costs and that in any event they are a guide and a starting point. Judicial discretion and the 8 pillars of wisdom are also factors that are clearly relevant and something that all parties should bear in mind when considering what hourly rates should be applicable to a particular case.

The revised guide specifically allows for higher rates to be allowed for Grades A, B and C. There has been an intentional shift and change by the civil justice committee with the wording of the guide. Grade C now includes fee earners of equivalent experience to Solicitors and Legal Executives of under 4 years’ experience and it is for that reason that Grade D is not included in the revised guide.

In practice, practitioners now need to be considering how their retainers are constructed in respect of hourly rates. As the Court have been very clear about post PLK , the decision in that case was not a one way ticket to a 20% enhancement being awarded on all rates. The case had to first of all, be able to charge that level of rates in line with the retainer. As many firms will have the description of their grades quite plainly A-D , it will be important to consider whether essentially a non-qualified fee earner of 3 years’ experience can charge a rate commensurate to that of a Grade C in line with the wording of your retainer. Clearly, the Court are not intending for all fee earners to be claimed at a minimum of Grade C. As many of you will have experienced, there are often rates awarded below guideline rates for “clerking work” or “accountancy work”. However, it is something I feel that will be missed and something worth considering.

Quite rightly there were responses provided to the consultation and initial recommendations in January 2021 voicing concerns over the potential conflict between the decision in PLK and the proposed rates. It was felt that the evidence that was provided in the case was substantial, however, the committee concluded that that they were not such that they should have an impact on the evidence based exercise which the committee had carried out. To surmise, PLK now has limited (if any) locus standi and it is the new 2021 guideline rates which will be relevant for practitioners.

When reading the report, from a Court of Protection perspective, it stood out that the committee were keen to express that the recommended rates were based on evidence and the revised guide enables assessments by the SCCO to allow higher than guideline hourly rates in individual cases if appropriate. Given the case law we have, it will be interesting to see whether those statements in practice happen or whether we will now simply see only the very “high end” cases see any sort of enhancement above the guideline rates.

If you have any questions or queries following the consideration of the summary then please do contact us and we will put these together and share a podcast of the top questions ahead of our next newsletter.