Part 36 consequences when a case is ‘re-formulated’? 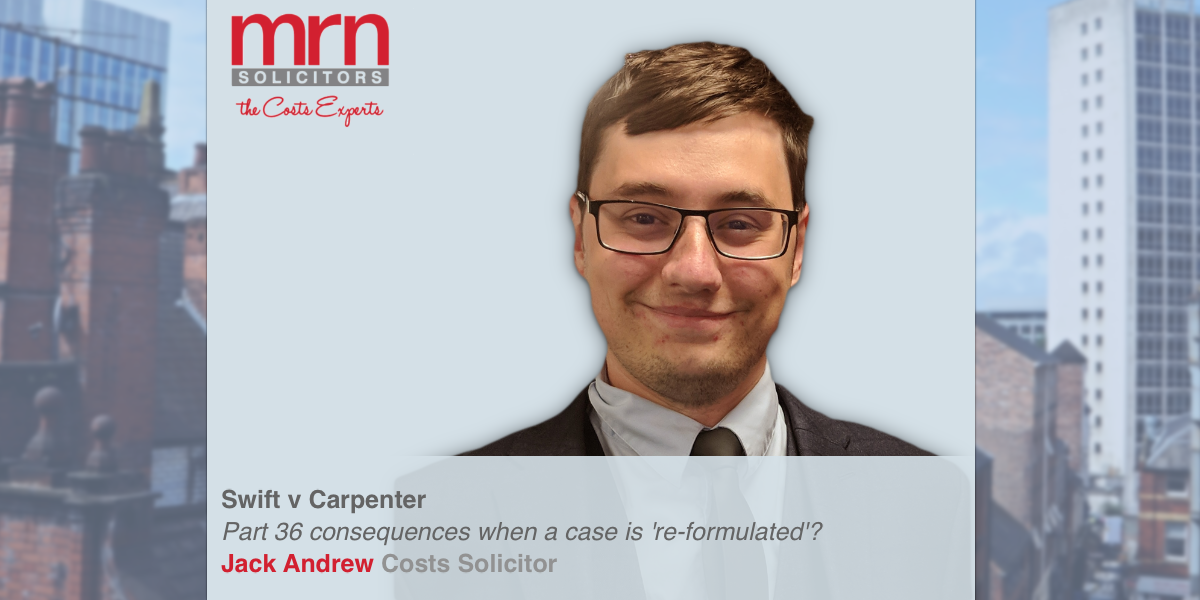 Pursuant to the landmark Court of Appeal decision in Swift v Carpenter, handed down on 9th October 2020, it would seem not all issues were concluded and a particular dispute concerning costs and Part 36 was left unresolved. This matter has now been addressed at a hearing on 6th November 2020, and so follows an interesting judgment pertaining to the costs that should be caught by Part 36, where a case is ‘reformulated’ part way through.

Now, whilst substantial agreement had been reached on the scope of Part 36, the Defendant / Respondent did not agree that appeal costs up to and including the adjournment of the appeal on 24th of July 2019, should be caught by the Part 36 offer and furthermore, it was their view that the Appellant should bear the costs to that point. The submission was that the successful basis of appeal had not been formulated up to that point, and that the adjournment was necessary because the Appellant had wished to ‘reformulate’ the case at that juncture. The Defendant / Respondent relied upon the case of Cheesman –v- Bowaters [1971] in support of their arguments, for which the Claimant had increased his claim at trial thus beating the payment in and the defendant was thus entitled to its costs prior to the date of the late amendment (which had caused the increase in the claim).

In rebuttal, the Claimant / Appellant argued the case of Cheesman –v- Bowaters [1971] was distinguishable on the facts and that the adjournment of 24th July 2019, only came after a without prejudice offer to accept in the sum of £800,000 on 6th August 2018, and after a Part 36 offer of 1 July 2019, to accept £800,000. As to the reformulation of the case, the Appellant argued that the Judgment recognised there was a range of expert evidence advanced in the appeal which would have been highly likely to be disallowed by the Queen’s Bench Masters; further that the issue of the reversionary interest approach was raised only at the July 2019 hearing (which had a significant bearing on the case); and that the Court made plain a desire to reach a properly informed conclusion so as to give enduring and workable guidance.

Following deliberation, Lord Justice Underhill, Lord Justice Irwin and Lady Justice Nicola Davies DBE, subsequently held the Claimant / Appellant had been successful in her appeal, beating her own and the Defendant’s settlement proposals, and accepted that the reformulation of the case was necessary (emphasis added) to provide relevant evidence. As such, the Court was with the Appellant that Cheesman –v- Bowaters [1971] was distinguishable on the facts of the case and the Claimant was awarded the costs of the appeal, on a standard basis, up to July 2019, and indemnity costs from that point onwards.

All in all, an interesting Judgment on a prospectively niche point. The Court of Appeal did reference the case was ‘unusual’, however, this should not be discounted when considering Part 36 consequences in circumstances where a case prospectively takes a different direction during the litigation and similar cost arguments are advanced by a party.