Points of Dispute and Jurisdiction 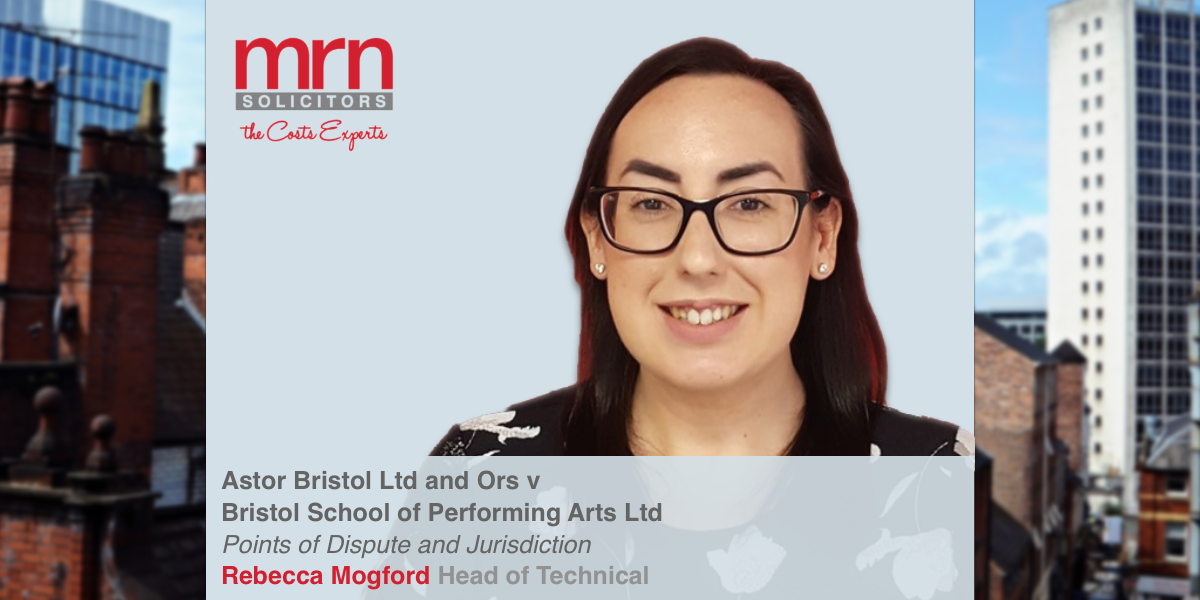 This case involved a question over jurisdiction and whether the First-tier Tribunal (FTT) incorrectly struck out the Points of Dispute that had been filed as a consequence of the appellant failing to comply with an Order to make an interim payment.

Judge Elizabeth Cooke said the FTT erred by not making an unless order first.

By way of brief background, the respondent was the applicant before the FTT regarding an application to rectify the register of title to the property occupied by the respondent to the appeal.

On 30th April 2020 the appellants were ordered to pay the respondents costs on the indemnity basis subjection to detailed assessment if not agreed following a decision made by the FTT on 2nd January 2020. Encompassed within that Order was a direction for an interim payment to be made in the sum of £48,184.74 by 22nd May 2020. On 5th June 2020 the FTT refused the appellants application for an extension of time to make the interim payment. On first blush this appears to be a harsh decision, however, one assumes the FTT must have had good reason to do this (particularly in light of the fact that as a country we were mid Pandemic!).

However, whilst this was going on the respondent served a Bill of Costs on 28th May 2020 with costs being sought in the sum of £142,501.59. Subsequently, and on time, the appellants filed their points of dispute. Shortly thereafter, the respondent made an application to the FTT for “debarring and/or unless orders against the appellants in response to their failure to pay an interim payment”. The application included 2 draft orders, one debarred the appellants from relying on their points of dispute and for Judgement to be entered in respect of costs in the sum of £142,501.59 and the other was for an order that unless the interim payment was made or alternatively a payment of £72,457.84 (the importance of this sum being the sum that should the Points of Dispute all been successful this would be the sum the bill of costs would be assessed at) within 14 days then they be debarred from relying on the Points of Dispute and judgment be entered in the sum of £142,501.59.

The first thing that springs to mind when reading the facts of the case is that the respondent had an Order that they could enforce and so that appears to have been the most appropriate route to go down at this juncture. Furthermore, I also query as to whether the FTT actually provided the respondent with what they were seeking by striking out the points of dispute. I say this because the language used in the application appeared to suggest they wanted the applicant debarring, but then also wanted their costs in full, so essentially striking out the points of dispute as if they had never been served appeared to be the conclusion reached by the FTT.

When the FTT made their decision, they gave the appellants 7 days to respond, a request for further time was made and this was denied by the FTT. Subsequently, on 21st July 2020 the FTT made an Order debarring the appellants from relying on their points of dispute and ordered to pay £142,501.59 to the respondent.

The appellants then sought permission to appeal on grounds of procedural fairness and lack of jurisdiction to make the order (or in the alternative that if there was jurisdiction that the judge had erred in her assessment of the costs following the striking out of the points of dispute).

The arguments regarding strike out put forward by the appellant were that the FTT did not have the power to strike out the Points of Dispute because striking out was governed by rule 9 of the Tribunal Procedure (First-tier Tribunal) (Property Chamber) Rules 2013 and the circumstances which that rule permits had not arisen. The respondent’s position was that the order had been validly made under rule 8 (2). The Judge had said that her order had been made under the wide powers to manage litigation under rules 6 and 8, in accordance with rule 3 and the requirement to manage it in accordance with the overriding objective. Rule 3 states that the overriding objective of the rules is to enable the tribunal to deal with cases fairly and justly but does not give any specific powers.

Moving on to what the respondent purported that the order had been validly made under 8 (2) that states :-

(2) If a party has failed to comply with a requirement in these Rules, a practice direction or a direction, the Tribunal may take such action as the Tribunal considers just, which may include—

I have highlighted above the relevant applicable sections that are relevant. However, rule 9 states: –

Clearly it is rule 9 that gives the FTT the power to strike out a case and as such for an Order to be made the case must meet the requirements as set out in that rule. Rule 9 goes on to state: –

It cannot be said that the respondent would be successful of any of the points a-e and as such because no unless order (as per 9.3(a)) was made then the order couldn’t have been correctly made under rule 9. In my view, had the FTT made an unless Order in line with the above rules and that had been breached then the appellants would have been limited recourse to be able to appeal that. However, that did not happen and as such the FTT had no jurisdiction to strike out the Points of Dispute under rule 9 and the appellant was successful with the appeal.

Clearly this is a lesson to be learnt when dealing with matters and questions over the validity of jurisdiction are raised. The Court (or other venue) has to have the power and ability to be able to order something for that to be valid, it simply cannot be made without the jurisdiction to do so.