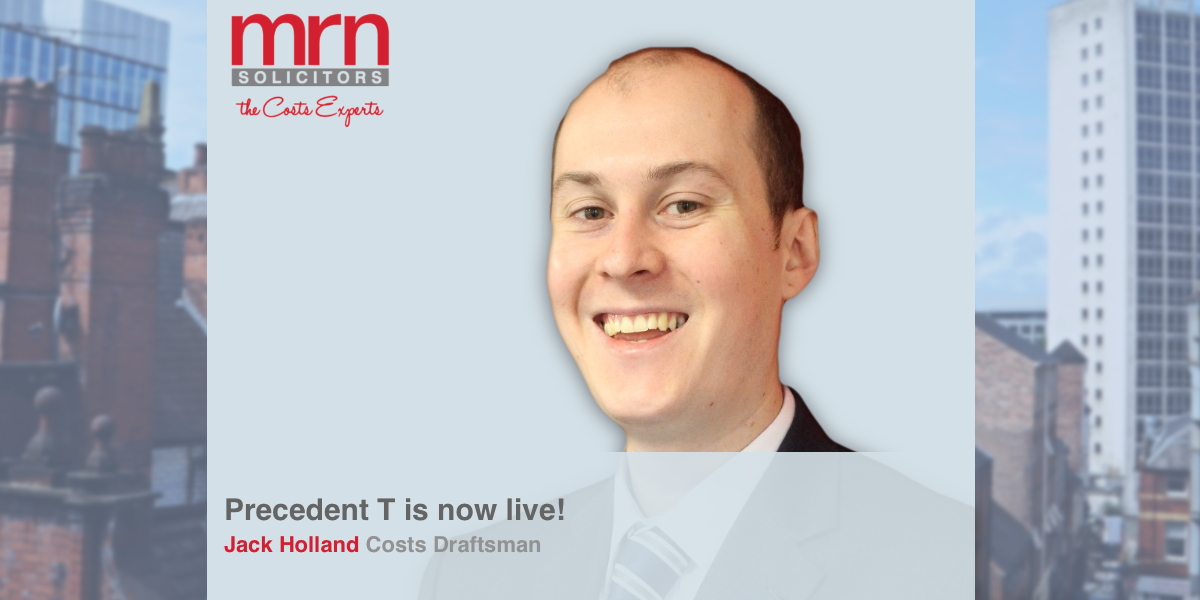 Following on from our earlier article we have now obtained sight of the newly drafted Precedent T which is to be implemented on 1 October 2020.

MRN’s initial observations are that the Precedent T has sought to simplify the process adopting a dual approach combining the Precedent H and R.

Starting with the front sheet of the Precedent T we note that the Court is further entrenching the position that global sums will be focused upon when deciding whether a variation is agreeable. This is highlighted by the fact that costs in respect of both the previously approved costs as well as the variations are not broken down to split profit costs and disbursements separately.

Furthermore we must be alive to the new Statement of Truth referencing CPR3.15(A) 3(c) that any variation must exclude any previously budgeted costs or variation to include any contingency. While this seems self-explanatory for phases already approved, the lines may be blurred in relation to contingencies which have developed beyond their original scope.

Moving onto the Variation Particulars of the Precedent T, the style is similar to the Precedent R seeking to condense the relevant information that is evaluated by the Court.  Here a breakdown of the variation sought is split between time and disbursements but again global sums are sought as opposed to itemised figures in line with the Precedent. We do however note that expert disbursements are given a supplementary box to mirror the Precedent H which is welcomed as this eases the ability to breakdown expert fees at any hearing.

In respect of explanations we can again see the Court is seeking to narrow the level of information provided. A single box is provided for a general explanation and specific phases commentary is only requested for sums in excessive of £10,000.00. It is questioned whether this will always be appropriate in more complex cases but does highlight the Court’s focus on the sums especially in cases where moderate revisions are sought.

Finally in a similar vein to the Precedent R, provision is also made for opposing comments within the Precedent T itself. This will act as a springboard to negotiations prior to the hearing and will undoubtedly ensure that some level of negotiations are entered into even if this simply sets out the starting position of the opposing party.

In summary the Precedent T seems a well-thought out and balanced document. While the level of detail now required is less than expected given the intricacies of the Precedent H it is hoped that this document will assist in streamlining the process of Revised Budgets and enable more consistent outcomes in the future.