Revisions to Costs Budgets: Best Practice and more than meets the eye to Significant Developments 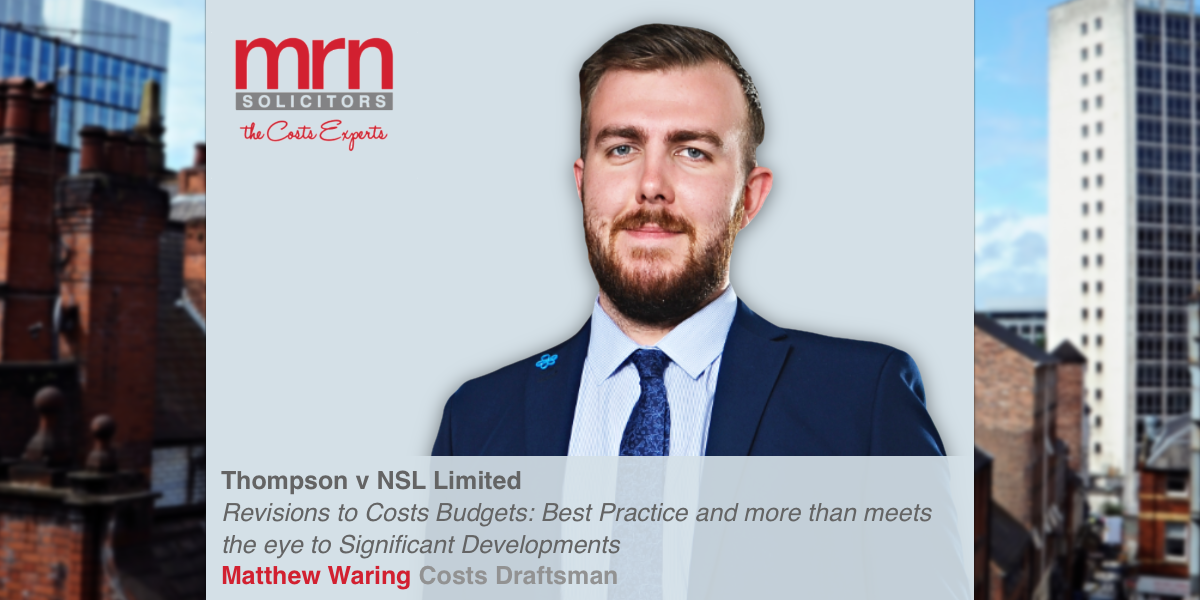 The issue of revising Costs Budgets is a matter of ongoing litigation given the number of recent Judgments handed down; this is under the new regime of CPR 3.15A being the “Promptness” test in addition to the “Significant Development” test.

The case of Thompson v NSL Limited is one which pre-dated CPR 3.15A, technically there was no need to consider the “promptness” test, but Master McCloud did provide some commentary on the issue.

Shortly after the CCMC, the Claimant made an Application to transfer the matter to the High Court and subsequently an Application was made to revise their Costs Budget upwards.

In relation to the Significant Development, the basis for the revision to the Costs Budget was not based just on value but also:

“on the argument that the case has turned out to be in certain key respects more complex and more demanding of legal time and cost than was reasonably anticipated when the budget was drafted.”

In relation to the test for satisfying that a Significant Development has occurred the Master confirmed that the bar should not be set too high as this would be undesirable as a matter of policy given the potential to “encourage inflated, precautionary budgets”

It was confirmed in the case of “Sharp v Blank and Others” that the point which Significant Development can occur is “since the [Costs] Budget was prepared”; as such this test was met as the Costs Budget had been prepared prior to the new evidence being received. However the Master advised that it was not always a case of a Significant Development being a single or specific event

“However there will be cases, and I think this is in part one of those, where the nature of the claim evolves and a time comes when it is reasonably appreciated that it is a different type of beast from the claim which was initially pursued, and that one may not be able to point to one specific event which led to that so much as a collection of factors.”

The Master provided guidance on the best practice to be undertaken in situations such as this, i.e. where the Significant Development had occurred after the deadline for filing the Costs Budget:

“In my judgment best practice if possible would be for the party needing a revision (where the significant development threshold is crossed after service of the budget and after the deadline has passed) to competently draft a revised budget, with access to the necessary costing expertise, and to provide it in proposed form first (as the rules currently require before an application is made to the court) to the other side with a view to agreement. That takes time to do properly especially where a change is a very significant one: it is unhelpful to do it less than competently. If it is not agreed – and the other party has been given a fair time to consider it – only then should application be made to revise the budget (and that, as the rules now say, must be done promptly once it is needed).”

In this particular case the above best practice simply could not be complied with due to the shortness of time and the Master appreciated this in her Judgment; however it was commented that the Claimant had made the appropriate Application without undue delay and any delays in the hearing of the Application were no fault of the Claimant.

A question some practitioners may ask themselves is why did the Claimant not inform the District Judge at the CCMC that the Costs Budget needed revision? The Master said this would have been ideal but it was by no means a factor to defeat the Application.

“the probable response from a judge in that situation would have been to note the point and say it was a bridge to cross in the event that an application was made, and I am now the judge on the bridge.”

On the flip side the Master said that it could be possible in certain situations to deal with the necessary variations “on the hoof”; however this would depend upon the facts of the case and the Master advised the facts of this case did not favour this approach as the favoured approach of Master McCloud was detailed in her Judgment.

“It is far better in my judgment that a ‘proper job’ of budgeting is done on the basis of properly drafted and served budgets at a CCMC with clear assumptions served in time for the strict CPR deadline (see my and the Court of Appeal’s judgment in the Mitchell case), and that if an intervening event or general evolution of the case means that the budget then before the court may in fact have to be revised later, then unless it is possible (competently) to revise and consider a new budget either budgeting should be deferred or it should be proceeded with but subject to a likely revision later.”

From this case it can be concluded that not all Significant Developments originate from a single event and consideration needs to be given to the potential for a number of events/factors which give rise to a Significant Development. This especially needs to be taken into account at the stage of preparing the Costs Budgets and whether any evidence is awaited which could impact the assumptions within the Costs Budget.