When will the Court exercise their discretion to order a Litigant in Person to file a budget? Rarely if CJ & LK Perk Partnership -v- Royal Bank of Scotland is anything to go by. 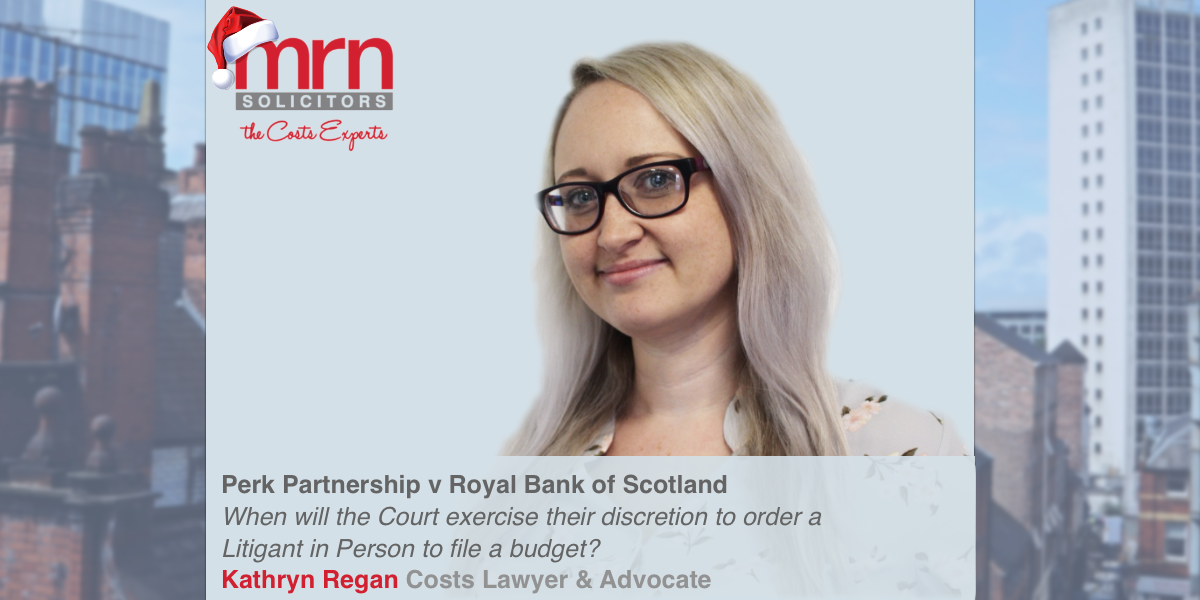 It has been drilled into litigators over the past 7 years that all parties are required to file and exchange budgets in Part 7 multi-track cases, save for the excepted cases under CPR 3.12(1). All parties except for Litigants in Person that is. Recently a represented party issued an application against a Litigant in Person in commercial court proceedings for an order that they be required to file a costs budget, which begs the question, when is it appropriate for a Litigant in Person to file a budget?

It was accepted by both parties in CJ & LK Perk Partnership -v- Royal Bank of Scotland [2020] EWHC 2563 (Comm) that the Court has the discretion to make an order that a Litigant in Person file a budget. The question was whether that discretion should be exercised in that particular matter. HHJ Mark Pelling QC noted that in most cases it would not be appropriate, particularly where the Litigant in Person was not receiving any support from direct access counsel or solicitors.

However, the matter of CJ & LK Perk Partnership was not a typical Litigant in Person case. The Litigant in Person was to be represented for significant parts of the process by direct access counsel and it was anticipated that the costs that would be incurred would be significant. Indeed, the Defendant’s concern stemmed from a recent application that had been before the Court in which the Claimant sought the sum of £87,000 in costs, which the Defendant stated was substantially in excess of the Defendant’s own costs for the same application. An understandable position given the introduction of costs budgeting and the changes to proportionality aimed at reducing costs.

The Defendant therefore contended it was appropriate for the Claimant’s costs to be budgeted, particularly as it would give the Defendant visibility on the likely costs which will be incurred and for which it might have exposure as part of a settlement process, a point which had apparently been relied upon heavily by the Claimant when seeking a revised costs budget in relation to the Defendant’s costs.

The Claimant would not consent to the application, averring that it would be difficult to predict the likely costs that a direct access barrister would incur given their instruction was not continuous as with a Solicitor. The Claimant’s concern was that there was a substantial risk that the budget would be understated by a significant amount and could lead to further satellite litigation in the form of applications for revised budgets.

HHJ Mark Pelling QC gave little weight to the argument regarding visibility on the basis that the Defendant could seek a costs estimate from the Claimant as part of the exchange of information leading to a mediation. He found that there was a balancing exercise required in weighing up the potential benefits against the potential implications and whilst he accepted that the costs that would be incurred using direct counsel were likely to be significant he felt this was significantly outweighed by the point that there was much less predictability about the costs that would be incurred by the Claimant.

“The reality is that the defendant is well able to estimate the likely costs of preparation of the trial and the trial itself, the estimates that can be made at this stage for the costs of assistance in relation to disclosure and witness statements are so unpredictable as to be really not worth the effort and if and to the extent there is a mediation, it will be open to the defendant to request costs estimates from the claimant at that stage.”

He therefore declined to make an order requiring the Claimant file a budget.

Whilst this matter is of course fact-specific, it is clear that simply because a Litigant-in-Person is incurring significant levels of costs on instruction of direct access Counsel does not mean that a Court will order costs management. Whilst there may be an argument that budgeting can take place in more predictable cases, in our view, it is nonetheless likely to be difficult to persuade a Court that a Litigant in Person should be ordered to file a budget.