Hourly Rates in summary for 2020 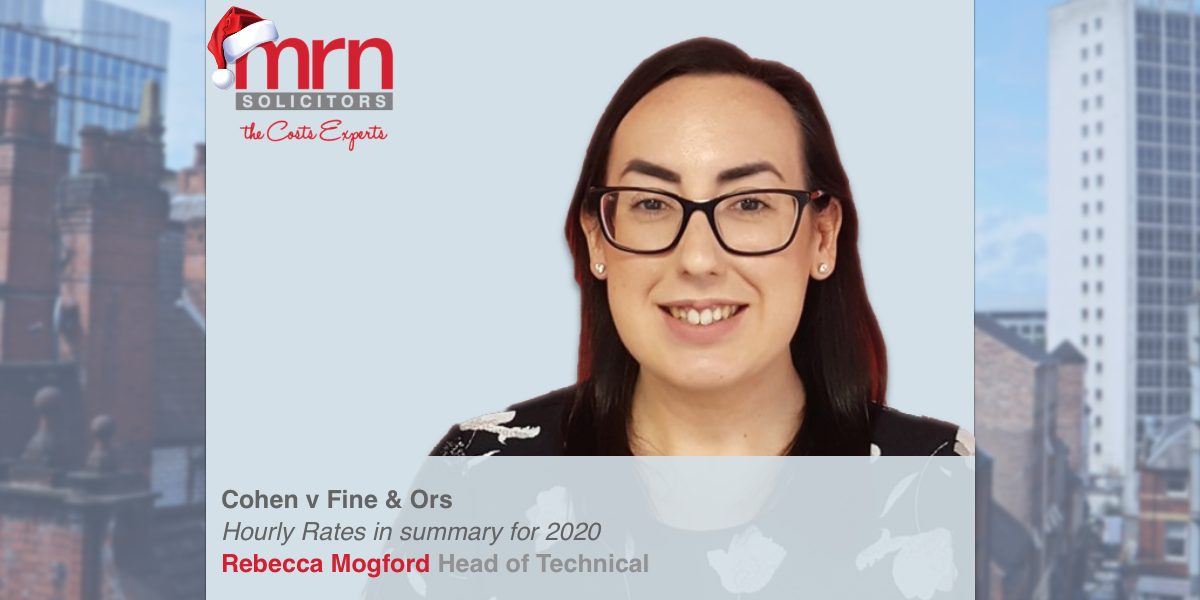 Over the last few months we have had a flurry of activity from various cases and commentary from the judiciary on hourly rates.

With what has been a challenging year at times for the legal industry, these developments have been warmly received.

As previously mentioned in our articles Master Gordon Saker pushing in the right direction on Hourly Rates and Court of Protection – Hourly Rates, is this a sign of things to come?, the topic of hourly rates has been gathering some speed and this has continued with the recent case of  Cohen v Fine & Ors [2020] EWHC 3278 (Ch).

This case provided an insight into the procedural aspects of summary assessment including how these should be conducted by the Court and also in relation to hourly rates which were sought by the receiving party at significantly above the guideline hourly rates.

The receiving party in this case appealed against the original decision awarding £27,000 on summary assessment. As a result, a “line by line” assessment of the receiving party’s costs resulted in an award of £35,703.00 which was allowed by HHJ Hodge QC who presided over the appeal.

“It is unsatisfactory that the guidelines are based on rates fixed in 2010 and reviewed in 2014, as they are not helpful in determining reasonable rates in 2019. The guideline rates are significantly lower than the current hourly rates in many London City solicitors, as used by both parties in this case. Further, updated guidelines would be very welcome.”

As previously detailed, a working group of the Civil Justice Council has been established to conduct an evidence-based review of the basis and amount of the guideline hourly rates, and to make recommendations accordingly to the Deputy Head of Civil Justice and to the Civil Justice Council. The working group recognise that the approach to, and the evidence for, fixing guideline hourly rates is a complex matter and although delays have been experienced (like most things) due to the pandemic, it still appears to be on schedule for a consultation period early in 2021.

However, in the meantime HHJ Hodge QC advised in this appeal

“In my experience of sitting in the Business & Property Courts, both in the North-west and in the Rolls Building, the present Guideline Hourly Rates are considerably below the rates actually being charged by the solicitors who practise in those Courts. Likewise, the Table of Counsel’s Fees bears no relationship to the fees which the Courts see being charged for counsel appearing in the Business & Property Courts. In my judgment, pending the outcome of the present review, the Guideline Hourly Rates should be the subject of, at least, an increase that takes due account of inflation. Using the Bank of England Inflation Calculator, it seems to me that an increase in the (Band One) figures for Manchester and Liverpool broadly in the order of 35% would be justified as a starting point (appropriately rounded-up for ease of calculation). That would produce figures as follows (with the present rates shown in brackets): A 295 (217) B 260 (192) C 220 (161) D 160 (118)”

Subsequently, in this specific case the appeal was allowed, with the receiving party also being awarded their costs of assessment. This is another warning shot (as if there hadn’t already been enough of an indication given previously) that guideline hourly rates simply do not represent a commensurate hourly rate for work being undertaken some 10 years after the last set of rates (which were always guidelines only) were set and it is critical that your retainers allow for higher rates.